‘Choosen One’ says Ryu has what it takes

‘Choosen One’ says Ryu has what it takes 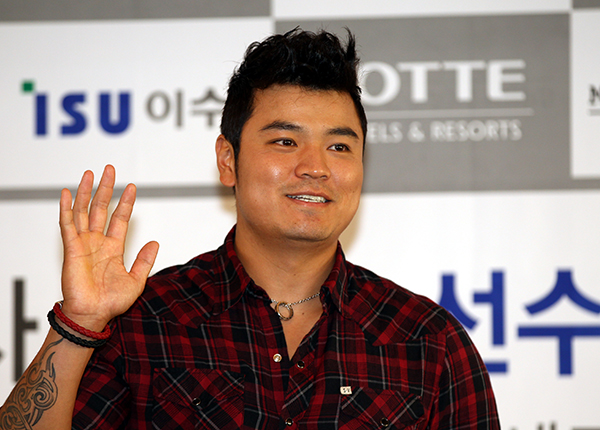 Choo Shin-soo of the Cleveland Indians at a press conference in Seoul yesterday hours after returning to Korea after finishing his fourth full season with the Indians. [YONHAP]


Choo Shin-soo, the only Korean national active in Major League Baseball, said yesterday that he sees strong potential for ace Ryu Hyun-jin of the Hanwha Eagles in the United States.

The Cleveland Indians slugger said that Ryu, 25, his former national teammate at the World Baseball Classic and 2006 Doha Asian Games, has the confidence and skills needed to compete in the Majors.

“Ryu Hyun-jin has no change in his facial expression when he allows a hit. The body language of a pitcher matters and Ryu Hyun-jin pitches very confidently.”

Choo said he has gone up against Baltimore Orioles ace Chen Wei-Yin, the 27-year-old from Taiwan, and thinks Ryu can play as well as the 12-game-winner. Ryu, the two-time winner of the Korea Baseball Organization’s Golden Glove Award, has expressed his wish to move to the Majors before he becomes a free agent in 2014. His request has hit a wall as the team looks to hold on to its star players after one of its worst seasons, finishing with 53 wins and 77 losses.

The newly employed manager Kim Eung-ryong and his coaching staff including assistant coach Lee Jong-beom have expressed concerns about sending away the team’s ace at what they say is a critical moment for the franchise, despite the mounting pressure from fans eager to see another Korean pitcher in the Majors.

Park Chan-ho, who earned 124 wins in MLB, left for Japan after the 2010 season and returned to Korea this year, leaving no Korean pitchers in the Majors. He signed a one-year contract with the Eagles and is being asked by the team’s coaches to stay with the club next season.

One way Ryu can realize his childhood dream early is a posting system, under which the Eagles could send him to any of the 30 MLB teams offering the highest bid for next season. The team has yet to announce its official stance on exercising the posting system for Ryu.

Choo, who started his professional career in the U.S. after graduating from Busan High School, returned to Korea early yesterday after finishing his fourth full season with the Indians on a positive note.

This year, he was nominated for the Hank Aaron Award, an award for the top hitter in each league, for the second time.

Choo, who himself becomes a free agent after next season, said he wants to play for a winning team, saying he is tired of being disappointed. The Indians haven’t advanced to the postseason since the 2008 season.

Choo said he isn’t sure of the possibility of a trade, citing “many variables.” The Indians hired Terry Francona as a new manager to replace Manny Acta, who they dismissed near the end of the 2012 season. Choo said the Indians are capable of being a winning team thanks to young talent.

About the prospect of joining Team Korea for the 2013 World Baseball Classic, Choo said he hopes to play but needs to talk with Francona for approval.