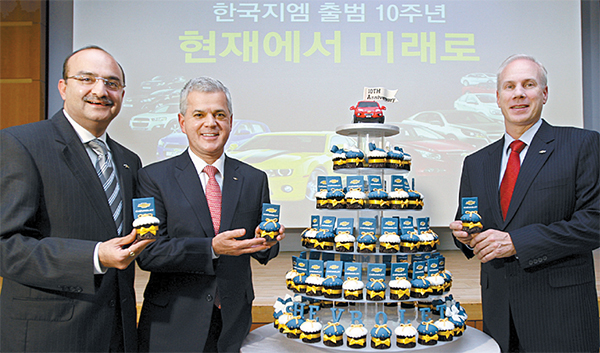 
General Motors Korea has seen its operating profit slip for the last three years despite rising sales but Sergio Rocha, its president and CEO, said the parent company is not to blame, refuting critics’ claims that the U.S. auto giant has demanded unreasonably low export prices.

“Our corporation has been helping us a lot, and without that help GM Korea wouldn’t have come this far. I’m not complaining at all,” the 53-year-old Brazilian said during a press conference at the company’s Bupyeong plant in Incheon yesterday amid celebrations of its 10th anniversary this month.

“I’m not happy with what we did in [terms of our sales performance here] in recent years and that is a task that we need to work on,” he said.

Some industry insiders blame dealings with the parent company for the imbalance as the latter moves to bring Korean-made products into the U.S. at cheap prices.

GM Korea has not only been supplying fully-made vehicles but also auto parts to GM and its affiliates. Last year, trade between two sides accounted for 66 percent of GM Korea’s total sales.

However, Rocha denied speculation that GM has been hurting its profits. The former president and managing director of GM Argentina, Uruguay and Paraguay also said Korea’s third-largest carmaker must first improve is its local business rather than dealing with issues relating to the corporate headquarters in Detroit.

The CEO, who succeeded John Buttermore in March, said the company will continue to invest more than 1 trillion won a year in new vehicles, powertrains, eco-friendly cars, design and engineering.

GM took over Daewoo Motors in 2002. Over the last decade, it has introduced 34 new vehicles starting with the Lacetti in 2002. It has also expanded seven production and R&D facilities, including the Bupyeong Design Center.

Rocha said the automaker will introduce its next-generation Chevrolet Trax, a small SUV, to the Korean market early next year, will plan to reinforce sales of its luxury Cadillacs through enhanced brand awareness and release a new Cadillac ATS.

He said that the company will begin producing the all-electric Chevrolet Spark at its Changwon plant next year. The city car will be sold in Korea and exported to several markets, including the United States.

“The Spark BEV [battery electric vehicle] combines the practicality of a mini car with the environmental friendliness of an electric vehicle,” Rocha said. “As GM’s first fully electric vehicle in the Korean market, it will showcase Korea’s important role in GM’s long-term global vehicle strategy.”

Rocha, who holds degrees in mechanical engineering and industrial engineering from his native Brazil, said the GM Korea Design Center in Incheon will double in size by the end of next year by integrating energy-saving technologies, while one of its plants will integrate solar power to be more eco-friendly. GM Korea will also expand the vehicle-testing capabilities of it’s Cheong-na Proving Ground in Incheon to create a stricter and more diverse testing program, he said.

Regarding GM’s attempt to buy a 17.02 percent stake in the local unit currently held by Korea Development Bank (KDB), Rocha confirmed that he met with KDB Chairman Kang Man-soo along with Tim Lee, president of GM’s international operations.

He refused to elaborate on their discussions, merely saying that “the deal is aimed at defending the interests of GM Korea’s operation and keeping us sustainable.”

GM and its affiliates own 82.98 percent of GM Korea.