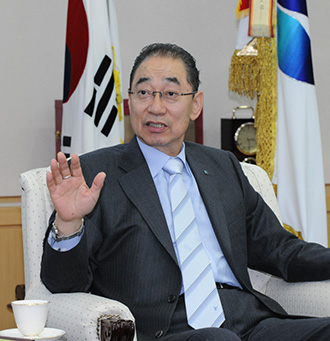 Kogas, led by CEO Choo Kang-soo, has been chosen as the top company in its sector by DJSI Korea.

The Korea Gas Corporation has been chosen as the top company in the gas and electricity sector for the fourth consecutive year by DJSI Korea, which includes the Korea Productivity Center, the S&P Dow Jones Indices and SAM.

DJSI, short for the Dow Jones Sustainability Indexes, is a sustainable management evaluation and investment global standard that evaluates a company’s economic situation as well as its environment and social impact. Kogas’ four-year winning streak is a first for a public enterprise.

“We started to promote sustainable management and tried to fulfill our social responsibility even more after we joined the UN Global Compact in 2007, and we believe our effort has been acknowledged in Korea as well as overseas,” said Min Young-woo, the senior executive vice president of Kogas. “We will work harder to improve the value of Kogas even more.”

According to an executive from the Korea Productivity Center, being named the top company by DJSI means that a company has the highest possible competitiveness in sustainable management in its sector and is the best company in terms of fulfilling its business goals while also being socially responsible.

More specifically, the DJSI is a global standard of socially responsible investment which evaluates companies economically and otherwise. The U.S. financial information company S&P Dow Jones and Swiss SAM, a global leader in sustainable management evaluation and investment, developed this index together in 1999.

The DJSI World Index is an elite listing of the top 10 percent of the world’s 2,500 companies by aggregate market price of liquid assets.

DJSI Asia Pacific is an evaluation of the top 600 companies in the Asia-Pacific region.

DJSI Korea is the first country-level DJSI, which includes the top 30 percent of the top 200 companies based in Korea.