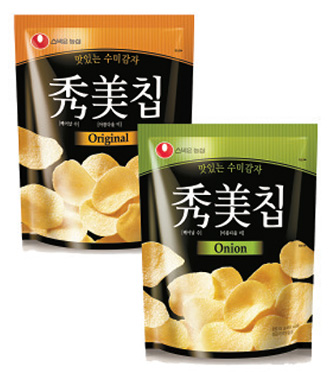 Nongshim is aiming to take over the fall snack market with its potato chip made of Korean Sumi potatoes.

Sumi potatoes are those most commonly sold in markets, and they make up about 80 percent of Korea’s total potato harvest. Since they have a rich flavor, they are a favorite in household dishes. But that special taste stems from the Sumi potatoes’ unusually high sugar content - 10 times more than other potatoes - and when made into chips, this sugar causes a browning that has kept them from wider use in the chip industry.

However with its own preparation and storage technology, Nongshim has successfully made products with Sumi potatoes all season long for the first time in Korea. Just like its name, the resulting Sumichip product is outstandingly beautiful. (The Chinese character for “su” means outstanding and “mi” means beautiful.)

In January 2005, Nongshim built a unique potato vacuum chip line at its Asan factory in South Chungcheong, using a low temperature, vacuum frying method to produce potato chips with 20 to 30 percent less fat. These new methods help to draw out the original flavor of a fresh potato and enable the company to produce a truly premium potato chip.

Thanks to Nongshim, customers can now enjoy the delicious potato taste on the table along with other snacks. Sumichip makes full use of the Sumi potato’s natural sugar to produce a much taster and authentic product.

And of course the new product method also eliminates the troublesome browning problem. Daeseo or Dubaek potatoes are frequently used by chip manufacturers because they do not brown, but with this new technology, Sumi potatoes can compete as well. The Sumi potato is able to show off its original color and is also crunchier than the alternatives.

To produce potato chips using domestic potatoes all year round, Nongshim purchases 20,000 tons of Sumi potatoes from around the country from June to November. Then, it uses its unique storage technology to keep a potato supply even in the offseason from December to May. That way, customers can enjoy chips anytime.

“Suzy’s pure image fits well with Sumichip, which is produced with natural Korean potatoes throughout the year,” said Kim Hyun-jung, senior vice president of Nongshim’s marketing team. “Through this advertising, we will promote the high-quality Sumichip image and emphasize that it is made with Korean potatoes in order to jump into the fall snack market this year.”