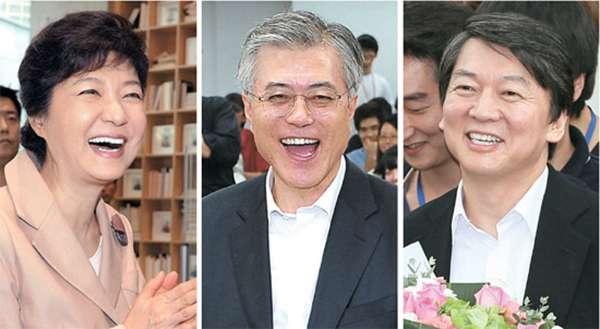 With 55 days left before the presidential election, voters are still in the dark about specific pledges of the presidential candidates even though the National Election Commission made public the top 10 promises of each.

It was the first time in a presidential election that the contenders were asked to submit their manifestos. Six contenders, including Park Geun-hye of the Saenuri Party, Moon Jae-in of the Democratic United Party and independent Ahn Cheol-soo filed their top 10 promises on major policy issues through the commission’s Web site. They were made public on Wednesday.

The commission asked the candidates to specify their 10 most important policies, how they will push them forward and within what time frame, and how they will finance the programs.

The candidates largely failed to give specifics on how they will implement their often abstract and ambiguous promises.

(Possibly in response to public disgruntlement over the lack of specifics, Moon said yesterday he will revise the details in his list and resubmit it later in the day.)

Most of the candidates - particularly the three front-runners Park, Moon and Ahn - focused their campaigns on promises of “economic democratization,” accompanied by wider welfare programs and job creation. While Park and Ahn put economic democratization as their first priority, Moon listed it as his third after jobs and welfare.

They all said bringing economic democracy to Korea won’t require any particular budget. They said revising laws and systems would achieve the goal.

While Park and Moon are backed by the largest parties in the National Assembly and have legislative power to make or revise laws, Ahn, an independent, has no clout in the legislature. His campaign is being supported by a single lawmaker in the 300-member National Assembly.

Other recurring themes on the pledge lists were jobs and welfare benefits. Park’s third promise was to come up with a new growth engine for the economy that would create jobs. She said she will realize the goal with an economic policy focused on job creation rather than growth. She also promised to employ advanced technologies. She said specifics on how she would finance the pledge would be provided later.

Ahn promised that everyone who wants work will find work. To this end, Ahn promised to stop discriminations against non-salaried workers and shorten the statutory work hours in order to create more jobs. To finance the promise, Ahn said he would cut unnecessary budget items and reprioritize government spending.

In comparison to those two, Moon’s pledge on employment was more specific. He promised to create three million jobs and achieve a 70 percent employment rate, up from around 60 percent. (The employment rate is of all Koreans over 15, not the economically active population.) He also promised to make 80 percent of the population middle class.

Moon said he will use money from the general accounts and state funds to finance his job pledge.

Providing wider welfare benefits was a common pledge among the three front-runners. While Park promised to create a Korean-style social safety net, she again said her plan to finance the pledge would be provided later.

Ahn promised to create a reliable welfare system with zero poverty among the elderly and a reinforced public child care system. He also said he opposes the privatization of the medical industry.

To finance his pledges, the independent candidate said he will first use any surplus in the government budget and scrap unnecessary infrastructure projects.

Moon promised free day care for children under 5 and cuts in college tuition of 50 percent. He also promised to double senior citizens’ pensions.

Moon said those promises will cost 35 trillion won ($31.9 billion) and he will raise the money through fiscal and tax reforms.

No candidate mentioned a hike in taxes to pay for the welfare benefits despite the forecast that next year’s tax revenues will be short by 13 trillion won.

The early reviews of the candidates’ promises were negative.

“It’s like students who fail to finish exams after a night of cramming,” said Lee Kwang-jae, secretary general of the civic group Korea Manifesto Center. “We will urge the candidates to present specific plans and financing plans once again.”

The candidates show no interest in debating each other until they have to at the debates held by the National Election Commission after the candidates formally register their candidacies on Nov. 25 and 26.

But all three have each made appearances on the SBS entertainment program “Healing Camp.”

“Although the clock is ticking, the candidates are engaged in political attacks while failing to present policies to tackle society’s issues and show their visions,” the Korea Manifesto Center said in a statement. “We are extremely worried that they are relying on an image competition.”

According to the National Election Commission, three debates will take place for the major candidates who are endorsed by a political party with more than five seats in the Assembly or scored an average of 5 percent support in recent opinion polls. A fourth debate is for candidates who fail to meet those requirements.