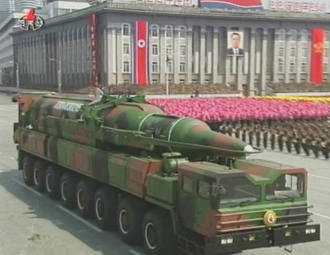 Seoul and Washington agreed to cooperate on a joint missile defense system against North Korea’s missiles - to shoot them down after they’re launched or even destroy them while still on the launchpad.

At the 44th Republic of Korea-United States Security Consultative Meeting at the Pentagon in Washington on Wednesday, Minister of Defense Kim Kwan-jin met with his U.S. counterpart, Leon Panetta, to discuss how they could strengthen cooperation against threats from North Korea in cyberspace and elsewhere.

It was the first time the two military leaders have met since the countries agreed earlier this month to revise a 2001 missile agreement and extend the range of South Korean ballistic missiles up to 800 kilometers (500 miles).

“The focus of much of our discussions was North Korea,” Panetta said. “Minister Kim and I reaffirmed that North Korean aggression or military provocation will not be tolerated and that we will continue working shoulder to shoulder to demonstrate our combined resolve.

“Minister Kim and I agreed on the need to strengthen cooperation with respect to protection of space and cyberspace domains,” Panetta added. “We must ensure that this alliance stays ahead of the cyber threat.”

The South Korean Defense Ministry told reporters Wednesday that one of the main issues discussed was the creation of a so-called “kill chain,” a preemptive missile protection system that can detect a North Korean ballistic missile before it is launched.

“We don’t have the equipment to detect every single move of the North Korean military,” a South Korean military official told the JoongAng Ilbo. “So we are desperately in need of help from the U.S. military to obtain information.”

Under the system, U.S. satellites and drones will detect the movement of a missile on a mobile launch platform and then immediately notify the South. Then, South Korean missiles and combat jets will strike the missile before it is launched.

According to the ministry, a counterstrike can take place 30 minutes after the information is received from the U.S., while injecting fuel into a long-range rocket takes 60 minutes.

Both sides also agreed on establishing a Korea Air Missile Defense interception system that can shoot down an incoming missile from North Korea at a low altitude. A joint working-level committee will be formed to work on the system.

South Korea still doesn’t have interception missiles that hit the target directly. The Defense Ministry denied allegations that it promised to import the latest U.S. Patriot missiles, such as PAC-3, in exchange for Washington’s revision of the 2001 Korean missile pact. On the transfer of wartime operational control of forces in Korea in 2015, Defense Minister Kim said the two sides will form a new group to “discuss a future command structure.”