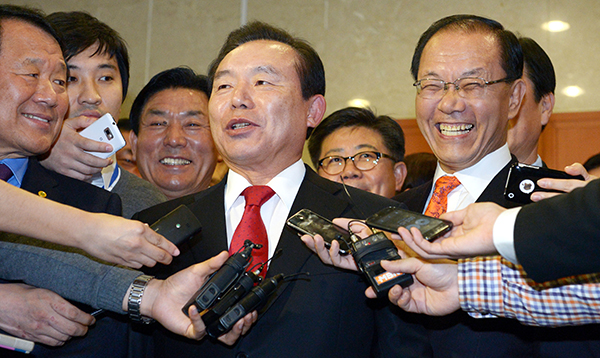 Rhee In-je, center, chairman of the Advancement and Unification Party, and Hwang Woo-yea, right, chairman of the Saenuri Party, speak to reporters yesterday in the National Assembly after announcing the merger of the two conservative parties. [NEWSIS]


The ruling Saenuri Party yesterday absorbed the Chungcheong-based conservative minority Advancement and Unification Party in a pursuit of the crucial region that played a key role in the past presidential races.

With 55 days left before the Dec. 19 presidential election, Chairman Hwang Woo-yea of the Saenuri Party and Chairman Rhee In-je of the Advancement and Unification Party held a press conference to announce the merger. The marriage between the two parties allows the Saenuri Party to command 153 lawmakers inside the 300-seat National Assembly.

“Our party’s regional support basis is the Chungcheong provinces, and the voters in the region strongly demanded the merger,” Rhee said yesterday. “It was a natural process.”

Rhee also said the party’s former chairman Lee Hoi-chang, a rightist political heavyweight, also supported the merger. Lee ran twice as the presidential candidate of the Grand National Party, the Saenuri Party’s predecessor, was defeated by his liberal rivals and left the GNP in 2007 to launch the minority party in 2008.

“Lee said the healthy, conservative, rightist must win the presidential election this time,” Rhee said. “And he promised to play an active role in reaching the goal.”

In the regionalism-ridden political landscape of Korea, winning voters of the Chungcheong provinces has long been a key to winning the presidency. According to the April legislative election voter registry, the region had more than 3.98 million voters, about 10 percent of the total 40.18 million voters around the nation.

Kim Young-sam, Kim Dae-jung and Roh Moo-hyun scored victories in Chungcheong in 1992, 1997 and 2002 and that translated to their presidential victories.

Once again, Chungcheong appeared to have an influence in the upcoming election. After media increasingly reported about the merger, Park’s popularity soared in Chungcheong this week.

Realmeter and JTBC conducted a survey with 1,500 voters including 140 from Daejeon and Chungcheong on Tuesday and Wednesday, and Park’s rating in the area went up to 51.3 percent from 42.3 percent on last Friday. In the latest poll, Ahn was supported by 22.5 percent in the area and Moon 16.5 percent.

In another poll by Gallup Korea, which took place from Monday to Wednesday, Park scored 50 percent in Chungcheong, while Moon followed with 20 percent and Ahn 18 percent.

“Park was actually behind Ahn among the Chungcheong voters until last week in a hypothetical two-way race,” said Lee Taek-soo, head of Realmeter. “But this week, she clearly turned it around. The merger seemed to have a strong impact.”

The merger, however, also has a flipside. According to Lee, Park’s move to unite the conservatives appeared to backfire in other regions and she didn’t see a significant increase in nationwide rating.

Not everyone in the Advancement and Unification Party was supportive of the merger. A group of party members who protested the move yesterday filed an injunction to the Seoul Southern District Court to stop the merger.