Third try at shooting a rocket into space today

Third try at shooting a rocket into space today 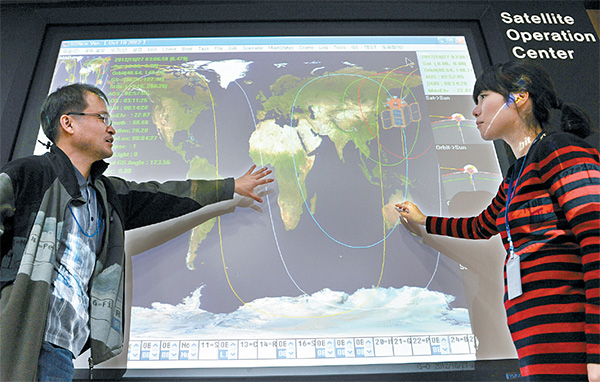 
Korea will once again attempt to lift a satellite into orbit atop its own rocket today, the third attempt in three years.

The Ministry of Education, Science and Technology said that the time of the launch from the Naro Space Center in Goheung, South Jeolla, of the Korea Space Launch Vehicle-1 (KSLV-1) will be announced at 1:30 p.m. and is estimated to be between 3:30 p.m. and 7 p.m.

There is tremendous pressure on the scientists to succeed with the third rocket, known as Naro-3.

Researchers at the Naro Space Center were extra stringent in a seven-hour launch inspection and rehearsal yesterday. The Korea Aerospace Research Institute (KARI) said that during the rehearsal, it held a launch simulation for the second-stage rocket.

“The launch rehearsal results did not reveal any abnormal conditions,” Kim Seung-jo, president of KARI, said yesterday. “We now just need to wait for the countdown.”

There were concerns about possible rain today, but the Korea Meteorological Administration yesterday forecast slightly overcast conditions in the southern region of the country.

If weather conditions remain favorable, experts say the launch will likely proceed at 3:30 p.m. The Naro-3 was installed on its launchpad on Wednesday.

The first-stage of the rocket was built in conjunction with Russia’s Khrunichev State Research and Production Space Center, and the second-stage was built by the Korea Aerospace Research Institute.

If Korea succeeds in putting a 100-kilogram (220-pound) research satellite at least 302 kilometers (188 miles) above earth into orbit, it will be the 10th country to join the “space club.” In Asia, Japan, China and India are already members.

Construction of the Naro Space Center in South Jeolla began with Russian assistance in 2000.

The Ministry of Education, Science and Technology said that regardless of whether the launch succeeds or not, it plans to enter the second stage of its space development program.

Residents of Goheung County will hold festivals today. Local inns and motels said they have been getting reservations for two months and most of the rooms are booked in the area.

“My heart was sorrowed by the failure of the first and second launches,” said one local resident, 58-year-old Kim Sung-cheol, yesterday. “I really hope for success this time to show Korea’s scientific prowess to the world.”