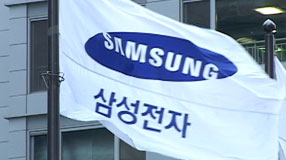 Samsung Electronics said yesterday its third-quarter operating profit surged 91 percent from a year earlier to a record high of 8.12 trillion won ($7.4 billion) on the back of robust sales of its flagship Galaxy smartphones.

The world’s top smartphone producer attributed the eye-popping performance to increased sales of handheld phones, including its Galaxy S3 model released in May, and stronger demand for display panels.

The IT and mobile communications division, which oversees smartphones, saw its operating profit in the third quarter jump 132 percent on-year to 5.63 trillion won. Revenues of 29.9 trillion won from that single division accounted for 57 percent of the company’s total.

Sales for the quarter ended Sept. 30 climbed 26 percent from the same period a year ago to 52.2 trillion won. 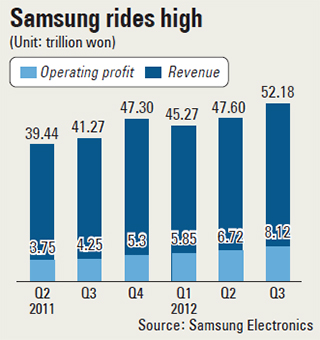 “The business environment remained difficult with global economic uncertainties persisting amid the fiscal concerns in the U.S. and Europe,” said Robert Yi, senior vice president and head of investor relations, in a statement. “However, we continued to break our quarterly profit records.”

According to market researcher Strategy Analytics yesterday, Samsung sold 56.9 million smartphones around the world in the third quarter - the largest quarterly figure for any smartphone producer - and that is double the figure from a year ago, which was 28.1 million units.

“Despite tough competition in stores and courtrooms, Samsung continued to deliver numerous hit models, from the high-end Galaxy Note phablet to the mass-market Galaxy Y,” said Neil Mawston, executive director at Strategy Analytics, in a statement. (The Galaxy Note is a combination phone and tablet computer, thus the term “phablet.”)

“Samsung and Apple combined now account for over half of all smartphones shipped worldwide, up from around one-third a year ago,” added Neil Shah, senior analyst at Strategy Analytics. “Volumes have polarized around those two brands.”

Samsung predicts year-end seasonality will push up demand for mobile devices, including tablet PCs, as new products make their way into markets with more competitive pricing. However, demand for PC DRAMs will be weak due to oversupply.

Meanwhile, Apple on Thursday reported that its quarterly profit climbed to $8.2 billion on revenue that rose to $36 billion on the back of hot-selling iPhones and iPads.

The California-based company said that it sold 26.9 million iPhones and 14 million iPads in the recently ended quarter, topping sales in the same period last year by 58 percent and 26 percent, respectively.

“They are going to have a big holiday quarter, a big March quarter, and then you have to wonder after that,” said Shaw Wu, an analyst at Sterne Agee & Leach.