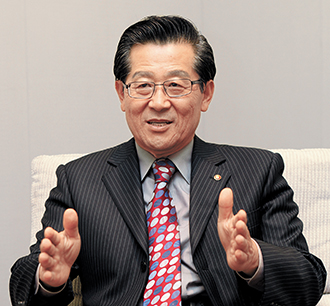 Stephan S. Huh, the chairman and CEO of PDI Global, changed the Minneapolis skyline. He is the architect who designed the Minneapolis Convention Center, the Bureau of Criminal Apprehension and other buildings in the major Midwestern city in the United States.

Huh is also regarded as a leading innovator in the construction industry after adopting a “knowledge sharing network” in his company. He says this is the answer to “creating a better future.”

“If the 20th century was the era of manufacturing, the 21st century is the era of sharing knowledge,” said Huh, who was in Korea to participate in the 11th World Korean Business Convention in Seoul last week.

In 2006, PDI launched a consortium of companies around the world that specialize in design and construction, including architecture, engineering and construction management. These members share their information or expertise to land global construction projects and finish their jobs in their specialized fields.

The consortium members have been expanding in recent years. It now includes more than 90 firms from 14 countries.

The 68-year-old Incheon-born CEO said that although the network might not be seen as a major move to others, it opens doors to promising firms to join global projects.

For example, if an architect who only has designed small buildings suddenly receives an offer to design high-story buildings, the member in consortium that specializes in the field will pass over knowledge or experience for the architect to win the contract.

“It is the same system found in film production when directors, actors, cameramen, editors, costume designers and all other specialists in each sector form a team to make a movie,” he said. “I got this idea by watching Nike, which didn’t have its own factory and designers in the past, but became No. 1 in the world.”

Huh’s plan has been working so far. PDI now receives projects not only from the U.S. and Korea, but also in countries like Colombia and Azerbaijan. It is currently working on projects in Congo, Iraq and China to build housing complexes and related facilities.

Despite the frozen construction market due to the economic slowdown, PDI is expected to operate in the black.

“If you look at Nokia, it shows that high technology can be quickly drawn back,” said Huh, who has won top honors in 30 national and international design competitions.

“But the design of a building is remembered by people for a long time.”