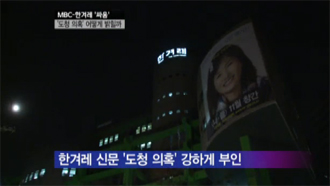 Prosecutors yesterday raided a newspaper building that houses the Jeongsu Scholarship Foundation to investigate the allegation that a reporter had illegally recorded a private conversation between the chairman of the charity and executives of a major broadcaster.

The Hankyoreh newspaper made some exclusive reports earlier this month on the talks between Choi Phil-lip, the foundation’s chairman, and two executives of the Munhwa Broadcasting Corporation, or MBC.

The reports said the three discussed the foundation’s sale of its 30-percent stake in MBC with an aim to assist the presidential campaign of Park Geun-hye of the Saenuri Party.

The controversial foundation was the latest Achilles’ heel for Park. Her critics used it to remind voters of the authoritarian rule of her father, Park Chung Hee, since the foundation was set up in 1962 with assets confiscated from a businessman in Busan.

Park chaired the foundation for 11 years and Choi, a former aide in the Park Chung Hee Blue House, currently chairs it.

Following the Hankyoreh reports, which included a detailed excerpt of the conservation among Choi and two MBC executives in a private meeting on Sept. 8, the broadcaster asked the prosecution to look into the possibility that the newspaper had illegally recorded their talks. The meeting took place at the Jeongsu Scholarship Foundation office inside the Kyunghyang Shinmun building in central Seoul.

The Seoul Central District Prosecutors’ Office raided the building yesterday to look into the possible legal violation committed by the newspaper reporter.

Investigators seized the surveillance footage from the CCTV cameras inside the building, including those monitoring the hallway that leads to the foundation chairman’s office.