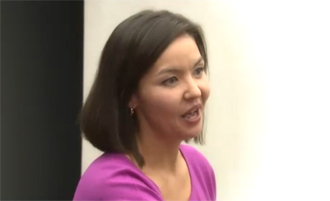 The ruling Saenuri Party yesterday appointed an American woman as its spokeswoman for the foreign press to better deal with correspondents in Korea with 53 days left until the presidential election as of today.

Margaret Frances Key, born to a Korean mother and a British father, currently serves as head of the Burson-Marsteller Korea, a U.S.-based global communications firm, and will work for the Park campaign to work with foreign media outlets covering political rallies in the run-up to the country’s biggest political event this year.

The spokeswoman, who has lived in Korea for 15 years, is a graduate of Wofford College in the U.S. and came to Korea during her college years as an exchange student to Sogang University in 1995, where candidate Park Geun-hye is an alumni.

From 1996 to 1999, the newly appointed Saenuri worker studied internal relations at Yonsei University for her master’s degree.

An expert in the field of public relations, Key headed Korean and Japanese units of the global public relations company Edelman before taking her job at the Burson-Marsteller.

“Her [Park’s] policies for the Korean economy and people are probably the best for what’s happening right now, especially considering [other] candidates,” said the spokesperson during a press briefing at party headquarters in Yeouido, western Seoul.

The appointment decision by the ruling party to include a foreign national in its campaign team followed its move made five years ago when the presidential campaign for then-candidate Lee Myung-bak cast German-naturalized-Korean Lee Charm as a campaign aide to Lee.