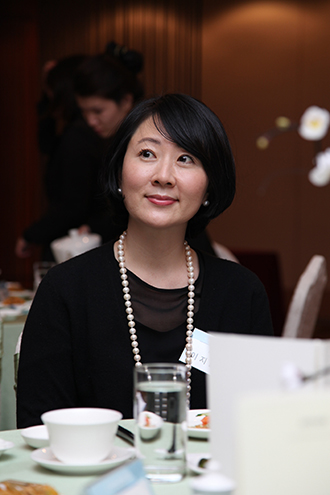 First launched in Japan in 2007, Table For Two (TFT) is a nonprofit organization that ultimately aspires to equalize the global imbalance in the distribution of food. TFT raises donations from individuals by offering low-calorie meals that include an extra payment that is then used to buy a meal for a famished child in Africa.

The movement has now spread internationally and currently has overseas operations in eight countries, including Korea. While TFT Korea has the same objective, it carries out a slightly different process for donations.

If a certain restaurant participates in the movement, it takes out 300 won ($0.25) from a dish’s price and sends it to TFT.

The CEO of TFT Korea, Lee Ji-hyun, is the daughter of the former deputy prime minister for economic affairs, Lee Hyun-jae. After her time as a news anchor for SBS, Lee went on to become the first-ever foreign affairs spokesperson for the Blue House, the representative for the National Security Council and a current events host for Arirang TV.

Then, Lee took a much deserved break.

“I was tired of the restricted Korean press and politics. I wanted to work in a more global environment, so I started to plan a project where international leaders would be able to unite and work together for educational purposes,” Lee says.

After having gathered 70 leaders from 35 countries in New York to open the “Public Leaders’ Forum,” Lee hosted the “Meeting for Young Leaders from Korea, China and Japan” discussion four times since 2010.

Since its launch last year, TFT Korea has created a significant following. The cafeterias of the communications equipment company SOLiD; the Ministry of Education, Science and Technology; the National Research Foundation of Korea; and many more affiliated public organizations are participating in the TFT program.

Shinhan Bank is also encouraging customers to take part in this campaign. Coffee distributor EMI has announced that for every instant coffee box it sells, the company will donate 300 won to TFT.

“We didn’t do any special promotions, but it’s incredible to see so many people, especially university students, coming to do volunteer work for us. I thank them so much. I’m also planning on a project to educate young people who dream of working in social enterprises.”