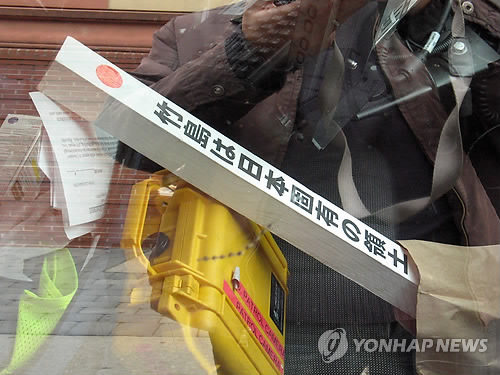 A historic monument at a U.S. public park to commemorate Korean women forced into sexual slavery by Japanese troops during the World War II has been vandalized, a local civic group said Friday.

The monument, a brass plaque on a block of stone, was erected in 2010 at Palisades Park in front of a municipal library in New Jersey in memory of so-called comfort women.

It was "defiled with a stake by an unidentified perpetrator," said the group, which calls itself Korean American Civic Empowerment. Local police began investigation, it said in a statement.

The group said it found the monument defaced earlier in the day, adding a sign reading Dokdo "is Japan's indigenous territory" was also placed there.

A sticker with the same message was found attached to the entrance of the petition room of the South Korean consulate in New York.

Dokdo, a pair of volcanic outcroppings in the East Sea, belongs to South Korea but Japan claims sovereignty. Japan calls the islands Takeshima.

Relations between Seoul and Tokyo have soured again in recent months due to the Dokdo issue and disputes over their shared history, including Japan's brutal colonization of Korea from 1910 to 1945.

The monument in Palisades Park is the first one in the U.S. dedicated to the victims of Japan's past atrocities. Japanese diplomats and residents here have lobbied the local authorities to remove the monument, according to sources.

The Korean consulate in New York asked police to investigate the cases and U.S. authorities said they will thoroughly probe into whether the two incidents are related, promising to take stern actions if necessary.

A similar act of vandalism occurred in mid-June in Seoul when a right-wing Japanese activist set up a provocative wooden stake beside a bronze statue of a young girl in front of the Japanese embassy.

The bronze statue symbolizes Korean "comfort women" and was installed by former victims of sexual slavery under Japanese military rule during World War II and their supporters. (Yonhap)