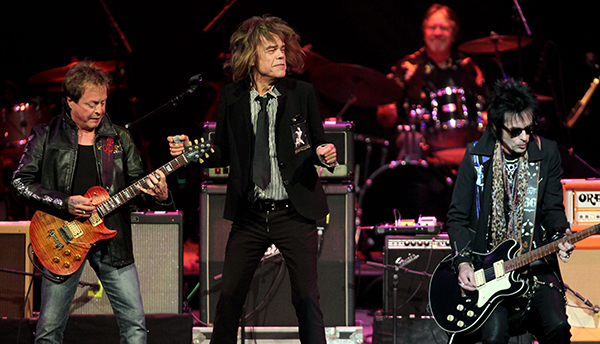 Rick Derringer, left, David Johansen, second from left, and Earl Slick perform during the tribute concert that culminated in the anointing of Chuck Berry as the 17th American Music Master on Saturday at the State Theater in Cleveland. [AP]

“And as soon as I can get someone to guide me - and I do know a little about the business - I want to push them out,’’ he said at the Rock and Roll Hall of Fame and Museum, which honored him with an award and tribute concert.

“I’m going to come back and push them out, if you know what I mean, somehow.’’

Berry, a rock pioneer with early hits that included “Roll Over Beethoven,’’ “Sweet Little Sixteen’’ and “Johnny B. Goode,’’ wouldn’t tip his hand in detail about the new songs or when they might be released.

“They might be old, but they are the same type of music that I have been playing,’’ he said.

Berry, who still performs monthly at a club in suburban St. Louis, offered advice to the performers: “Keep rocking, keep rocking. That’s two words. Next word is: Be kind to your fans.’’

To mark the American Music Masters award presentation, the rock hall has mounted a special exhibition with items including Berry’s stage clothes, a guitar and his 1958 Chess Records recording contract.

The rock hall’s new library and archives has a separate exhibit with items including Berry’s 1964 British tour program and a handbill promoting his appearance with the Grateful Dead in 1968.

Berry, the museum’s first inductee in 1986, called the award and enshrinement in the rock hall a great honor.