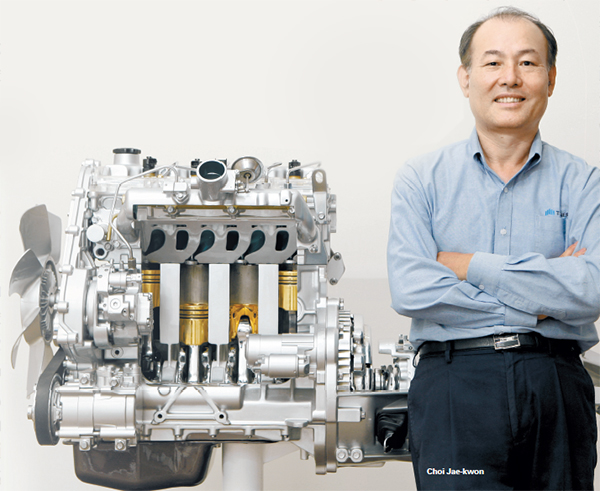 
SUWON, Gyeonggi - As they lacked the technology and expertise needed for car-engine development in the past, local automakers would turn to foreign companies like Germany’s FEV and the U.K.’s Ricardo for help.

These days they are just as likely to consult with Tenergy, the only non-automaker in Asia that designs and develops its own engines. It was founded by Choi Jae-kwon, a former engineer at Hyundai Motor, and is located at the Advanced Institute of Convergence Technology in Suwon. It has just 90 employees.

“I really wanted to develop engines using my own ability,” said Choi.

Armed with a bachelor’s degree in mechanical engineering from Seoul National University, he worked at Hyundai for 17 years and was a core part of the team that developed the company’s first homegrown engine, the Alpha.

He parted ways with Hyundai in 2001 to take the helm at FEV Korea before branching out on his own in 2008.

“Fortunately, many people in the industry knew me from my time at Hyundai, so I was able to get quite a bit of help. But it was still hard work to recruit talented engineers and raise awareness of our company’s engineering capability.”

Tenergy - a contraction of Technology of Energy - posted sales in excess of 1 billion won ($910,860) in its first year and the number is expected to reach 15 billion won this year. Now Choi’s company is working with the government on powertrain-related projects, as well as engaging in projects with the likes of BMW, Volkswagen, Toyota, Honda and Volvo.

Eighty of its 90 employees are R&D personnel, and 60 percent have either a master’s or doctorate degree in engineering. The company will soon open another R&D center specializing in hybrid engines in Detroit, and is planning a third in Hwaseong, Gyeonggi in the near future, Choi said, with an eye on sustainable growth and environmental friendliness.

It has also formed a special task force this year to further develop transmission technology as it bids to diversify, he added.

The CEO said fuel efficiency is a hotter issue now than ever before and expressed skepticism that electric vehicles (EV) pose a serious threat to internal combustion engine at this stage.

“I think the era of mass EVs is coming anytime soon, as producing electricity for such vehicles is still a problem,” he said. “Besides this, commercial vehicles or big trucks will still need internal combustion engines to operate, so what we need to focus on right now is improving engines’ fuel efficiency.”

Choi said he is targeting making Tenergy one of the three best engine-calibration companies in the world within the next 20 years by fostering talented engineers. He also sees this as contributing to the healthy growth of the nation’s automotive industry.

“It’s relatively easy to finance projects, but it’s very hard to improve technology by finding the right people,” he said. “I feel quite bitter when I see my staff pack up and leave after I’ve invested so much in raising them to the level of world-class engineers.”

Choi, who still sees himself as more of an engineer than businessman, said he always sets the bar high in his quest for success.

“Business is about creating opportunities,” he said. “In order to succeed, what I need to do is put in at least 20 or 30 percent more effort than what people expect.”