Engineers and project managers from overseas branches of Samsung Engineering participate in the company’s first global conference at its headquarters in eastern Seoul. Provided by the company


As local businesses increasingly expand into global markets, the demand for foreign employees at Seoul-based headquarters has risen significantly. Samsung Electronics recently said the number foreign workers it employs in Korea surpassed 1,000 for the first time.

A Korea JoongAng Daily report found that foreigners at local companies say they are “mostly satisfied” with working conditions, but cultural frictions can often hinder life at the office. 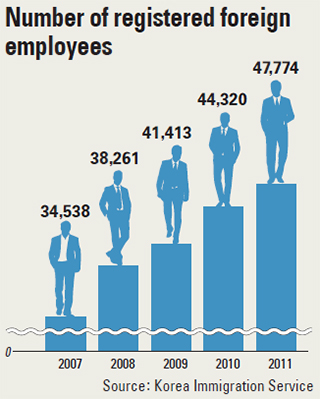 A 27-year-old man from Bangladesh currently working at a one of the country’s conglomerates said that when he first joined the company last year, he struggled to adapt to the hoesik drinking culture.

“Having drinks with seniors can be a good chance to get to know each other, but it is not comfortable at all because older people at the company force us to drink,” he said.

The graduate of Seoul National University came to Korea six years ago and decided to work at a local company to learn about advanced corporate systems and Korean culture before returning to his country.

He said he has come to appreciate the drinking sessions after work, but still finds it difficult to mesh with his colleagues at times.

“Even though I am quite fluent in Korean, there’s some slang or situational things that I don’t understand,” the Bangladeshi worker said. “One of my seniors yelled at me because I made a mistake after misunderstanding his words.

“I also found it difficult to understand why Koreans often lose their temper while working.”

A 25-year-old marketer from Kenya said he still struggles with the seniority system established at most Korean companies. He currently works at a major electronics company.

“At Korean companies, those who entered earlier have all the power, which I totally don’t understand,” he said. “I am not free at work. It is like I am in the military because I have to kind of obey the people who joined the company earlier than me.”

He said there are not many problems with communication at the office these days because most Koreans speak a fair amount of English, and he has had few problems adapting to Korean food and culture outside of work.

But the Kenyan employee, who has been working at the company for just seven months, says he hates the “forceful” atmosphere he feels at the office.

A 30-year-old Chinese man working at one of the country’s major conglomerates said he has struggled to adapt to the working hours in Korea.

“I like that Koreans work speedily and pursue perfection, but what I don’t understand is that people tend to work late,” the employee said.

He also said he found it “weird” that juniors often don’t leave to go home before their seniors.

Korean companies are hiring more and more foreigners who studied in the country in order to train and assign them to global sales and marketing divisions as the companies expand their businesses overseas, especially in emerging economies.

Whereas foreigners outside of the country were previously targeted for these positions, the new trend is to find foreign talents at home who have learned about Korean corporate culture and send them to overseas branches.

“From the outside, it seems like Korean and foreign employees work in harmony, but that’s not the truth,” said a Korean employee at a local construction company.

“Due to cultural differences and difficulties with communication, internal conflicts are getting serious between Koreans and non-Koreans.”

Most conglomerates declined to reveal how many foreign employees they have, since many of them are working in future global business units or in confidential R&D divisions.

Given that foreigners who are qualified to work in the country have E1 through E7 visas, which are given to specialized work forces like teachers, technicians and researchers, a rough estimate can be made.

According to the Korea Immigration Service, the number of foreigners who reside in the country with those visas stands at 47,774 as of last year. Of these, 22,435 are English teachers.

Samsung Electronics runs the Global Help Desk that provides curtailed support assisting with everything from visa issuance to finding housing and grocery shopping. The company offers Korean language classes as all internal documents are required to be written in both Korean and English.

The tech giant started hiring foreigners in Korea in early 2000. The total number of foreign employees rose from 100 at that time to 600 around 2008, and reached 1,000 this year.

About 9 percent of Samsung Engineering’s 8,800 employees are non-Korean and come from 34 different countries.

The company has opened a new cafeteria this year to offer various cuisines ranging from Vietnamese to Middle Eastern and Indian. A chef at the cafeteria prepares food with halal meat for those who practice Islam. There is also a prayer room in the company building.