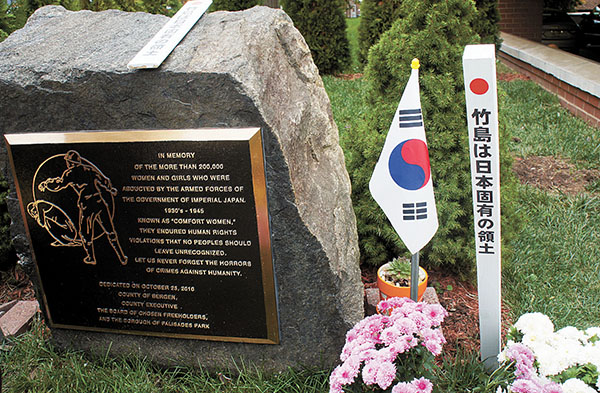 A white wooden stake claiming Japan’s territorial rights over the Dokdo islets was placed next to a historic monument at Palisades Park in New Jersey on Friday. Dokdo “is Japanese territory” is written in bold black characters. The monument was installed in October 2010 to commemorate the Korean women who were forced into sexual slavery by the Japanese military during World War II. [JoongAng Ilbo]


A white wooden stake claiming Japan’s ownership of the Dokdo islets, Korea’s easternmost territory, was found at the entrance of the Korean consulate in Manhattan on Saturday, following a similar case at a monument in Palisades Park, New Jersey, the previous day.

According to the Korean consulate in New York, officials found the wooden stake with “Takeshima [Japan’s name for the Dokdo islets] is Japan’s territory” written in bold black letters at the entrance of the building.

The consulate reported the incident to the New York Police Department.

On Friday, a sticker with the same message in Japanese and English was also found underneath the entrance signboard of the Korean consulate.

On the same day, a one-meter-long stake was found next to the monument in New Jersey installed in 2010 to commemorate “comfort women,” a euphemistic reference to Korean women who were forced into sexual slavery by the Japanese military during World War II.

Korean American Civic Empowerment, a U.S.-based civic group, reported the incident to police immediately and the authorities have begun an investigation.

“If this event turns into some sort of racist crime or some sort of biased crime, there would be investigation going on, and the perpetrator or perpetrators will be prosecuted in the event that turns out to be true,” said James Rotundo, mayor of Palisades Park.

Similar acts of vandalism occurred in Seoul and Tokyo this year.

In mid-June, Nobuyuki Suzuki, a 47-year-old right-wing Japanese activist, planted a wooden stake claiming Japan’s territorial rights over the Dokdo islets in front of the Peace Monument near the Japanese Embassy in Junghak-dong, central Seoul. The monument was installed in December of last year.

Amid rising tensions between the two nations, President Lee Myung-bak made a surprise visit to Dokdo in August, which prompted Japan to request that Korea take the territorial issue to the International Court of Justice. Seoul has rejected the request.