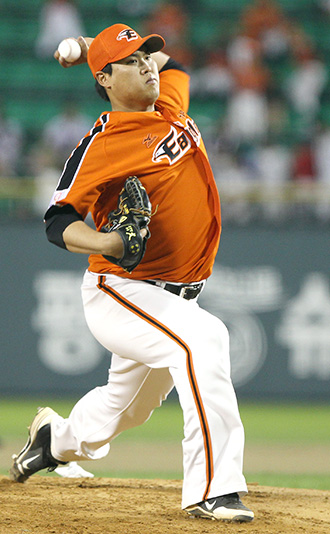 The Hanwha Eagles announced yesterday that the ball club has decided to exercise its so-called posting system for Ryu Hyun-jin beginning this week, clearing the way for the 25-year-old pitcher to play for a Major League Baseball team next season.

The decision came several days after the Eagles’ new manager Kim Euong-yong said in an interview with the Kookmin Ilbo that he was opposed to sending away the team’s left-handed ace at a critical moment for the franchise.

The Eagles, who recently finished one of the worst seasons in team history with the league’s worst record of 53 wins and 77 losses, said the decision was to serve the “broader” interests of Korean baseball. Public pressure had mounted on the club to send Ryu to the Major Leagues, where Korean pitchers have been absent after Park Chan-ho and Kim Byung-hyun left.

Only one Korean slugger, Choo Shin-soo of the Cleveland Indians, has made a Korean presence in the U.S. league.

“We will provide the necessary cooperation for Ryu Hyun-jin’s Major League posting,” the Eagles said in a statement.

Ryu, the two-time winner of the Korea Baseball Organization’s Golden Glove Award, has two seasons left before acquiring free-agent rights. But the seven-year pitcher can move to the big leagues for next season through the posting system if any of the 30 Major League clubs comes out with a satisfying offer for the pitcher and the Eagles.

The club with the highest offer will earn the exclusive rights to negotiate with the Eagles over the terms of his trade.

The Eagles made clear that the club will allow Ryu to go to the Major Leagues only when he gets a price tag “he deserves as the ace of the Republic of Korea.”

The posting system is exercised for a player who finishes seven seasons in the KBO and gets the endorsement from his club, but no players except one so far have moved to the U.S. through the system.

In 2009, the St. Louis Cardinals won negotiating rights for Choi Hyang-nam, then a Lotte Giants pitcher, with only a $101 bid. Choi joined the Cardinals’ spring training in 2009, but returned to Korea after playing in the minor leagues for one and a half years.

The Eagles said Ryu and the club have already reached a consensus on the kind of offer they deem fit from a Major League team, but said it won’t disclose the number to the public. The posting will be launched on Nov. 1 and run through March, an Eagles official said.

Ryu also agreed to the conditional departure, the club said.

“I appreciate the Hanwha Eagles with my whole heart for letting me participate in a posting, a first step toward playing in the Major Leagues,” Ryu said in the club’s statement.

“Hanwha is my hometown that has helped me grow to this level. If I don’t get my value properly recognized through this posting, I will attempt to play overseas after making more contributions to the team and the country.”