Corporate taxes in the crosshairs

Corporate taxes in the crosshairs 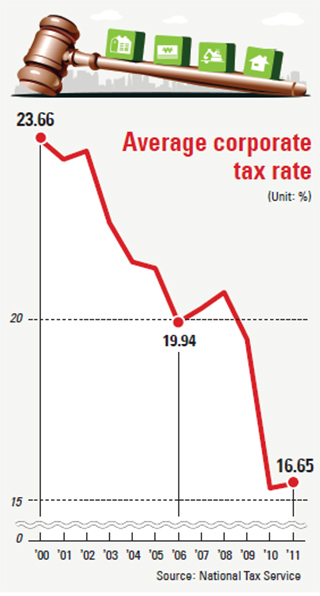 The debate on how much tax businesses should pay is getting louder as think tanks pour out reports one after another and presidential candidates increase their campaign pledges ahead of December’s election.

Many private agencies argue that the effective corporate tax rate is still too low compared to other countries. Candidate Moon Jae-in from the opposition Democratic United Party has said he hopes to raise it to draw more blood from the rich.

A think tank dubbed Good Capitalism released a report yesterday arguing that tax breaks for conglomerates should be eliminated. It said the corporate tax rate, which excludes the percentage of tax credits for companies, officially stood at 17.6 percent as of 2010.

According to the National Tax Service (NTS), it now stands at 16.6 percent based on corporate tax filings last year.

In Korea, companies with sales of more than 20 billion won ($18 million) a year pay the highest rate of 22 percent, while those that earn less than 200 million won pay the lowest rate of 10 percent.

The DUP candidate said the maximum rate should be bumped up to 25 percent, which would still make it significantly lower than the OECD average of 29.5 percent, the report added.

It said Korean companies pay lower taxes than their counterparts in Hong Kong, where the average rate is 24.3 percent, Singapore (25.5 percent) and Japan (39.6 percent).

Meanwhile, bigger companies seem to be paying less than SMEs. Samsung Electronics, the country’s biggest company by revenue, pays just 16.7 percent of its sales as tax, compared to numbers in excess of 40 percent for leading players in Japan and the U.S., the report showed.

“Korean conglomerates enjoy too many tax-exemption benefits,” said Park Seung-rok, a researcher at the institute. “The government is giving them too many exemptions for their R&D, employment and energy consumption efforts.”

“These should be given to the public, not conglomerates,” he added.

“The corporate tax rates [for other countries] might not be accurate because it is impossible for the think tank to count every business around the world,” said a government official in charge of corporate taxation at the Ministry of Strategy and Finance. “National governments do not reveal actual tax rates, so any such professed comparisons are by their very nature unreliable.”

Data compiled by the NTS show that the top 1 percent of business entities in Korea - the large, often family-controlled empires dubbed chaebol - account for over 86 percent of the country’s corporate tax revenues.

The conglomerates paid an average of 7.1 billion won each, the tax office calculated.