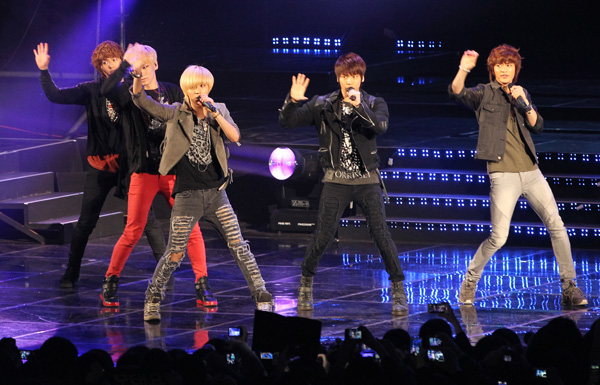 SM Entertainment announced yesterday that the night was a success with both the K-pop act and fans in awe of one another.

The K-pop act dazzled fans by singing an array of its hits from “Lucifer,” “Oxygen” and “Ring Ding Dong” to the latest hit “Sherlock.”

Meanwhile, the fans shocked the band by singing along in Korean and yelling cheers prepared in advanced by fan clubs.

The boy band’s agency said that the members were touched when the night drew to an end and the fans flew aquamarine paper planes toward the stage.

Ahead of the group’s concert, a press conference took place where various local media from Apple Daily to Oriental Daily all vied for the best spot to get the best shots of the group.

Last month, the group took to Taipei and thrilled some 18,000 fans.

Next month, it will perform in Singapore on Nov. 23 and Thailand on Nov. 25 as part of SM’s concert, “SM Town Live World Tour III.”