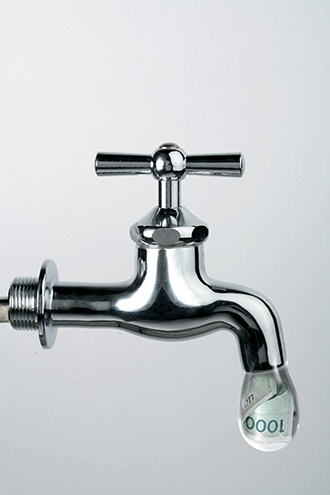 Citibank Korea’s limited lending to small and midsize companies drew the attention of the National Assembly last week, with Democratic United Party lawmaker Kim Gi-jun criticizing the U.S. parent company for not following through on its promises.

At a hearing on Wednesday, Kim said Citibank vowed to open the taps to smaller companies when the financial regulator approved its acquisition of then-Hanmi Bank, but in practice it reduced its loans to them to a rate 5 percent smaller than what the bank was offering in 2004.

Over the same period, lending to small and midsize companies (SMEs) by other commercial banks expanded 81 percent.

Foreign banks here have been criticized for their lack of sympathy for smaller firms while aggressively expanding loans to large businesses.

According to a recent report by the Bank of Korea, foreign banks’ lending to small and midsize companies as of June amounted to 212.9 billion won ($194.2 million). This is equivalent to one-eighth of the size of all loans made in 2007, when the total hit 1.66 trillion won.

Foreign banks’ lending has been stuck between 100 billion and 200 billion won since the global crisis of 2008. Last year, it amounted to 227 billion won.

In contrast, lending to conglomerates has been growing, even after the global crisis. It stood at 2.1 trillion won at of end of 2007 but more than doubled to over 4.5 trillion won in the first half of this year.

The two largest foreign banks, Standard Chartered Korea and Citibank Korea, have proven most stingy when it comes to small businesses, as their lending fell sharply this year due to the impact of the euro zone fiscal crisis and slowing economic growth in China and the United States.

It also showed that over 95.5 percent of corporate loans at the two banks were allocated to large-size companies in the first half, up from 55.9 percent in 2007.

Local banks showed a similar trend, although much less pronounced, with the corresponding share jumping from 12.9 percent to 24.2 percent over the same five-year period. Smaller businesses ate up the rest.

The tightened lending couldn’t come at a worse time for many SMEs as the deepening recession threatens their existence. According to the FSS last month, companies deemed borderline credit risks are now estimated to number as many as 1,355, a record high since such data was first compiled in 2009. These are companies with loans between 5 billion and 50 billion won.

“Both the export and domestic markets have been struggling this year as the euro zone crisis remains far from resolved,” said an official at the FSS.

“The number of companies that may have to apply for a court-led debt restructuring program is likely to increase substantially if the economy continues to wind down.” 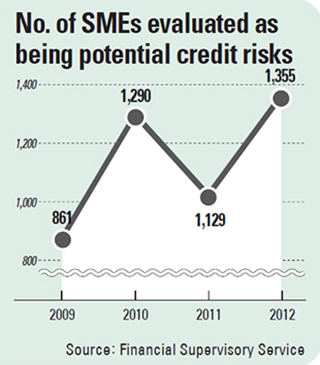 Earlier this month, the central bank lowered its economic outlook to 2.4 percent growth for 2012 as the global deceleration continues to impact Asia’s fourth-largest economy.

For many analysts, even this downwardly revised figure is pie-in-the-sky.

The economy inched up a mere 0.2 percent on-quarter in September, following on from similarly anemic growth of 0.3 percent in the previous quarter. Even in annualized terms, it stumbled along in Q3 to post growth of just 1.6 percent.

The government has been stressing the need to provide stimulus measures for SMEs to strengthen the nation’s economic structure.

“Lending to SMEs is not obligatory, but when you consider that loans to such companies by foreign banks are nearly obsolete, it begs the question of just how ethical these institutions’ lending practices are,” said Jeon Hyo-chan at the Samsung Economic Research Institute.