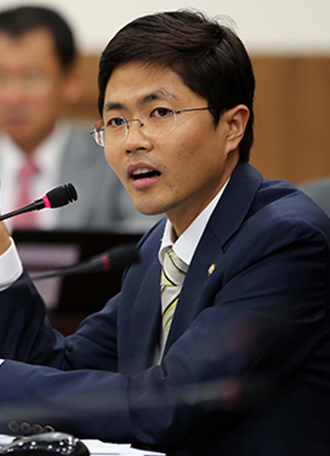 The conservative ruling party submitted a motion to discipline a young first-term lawmaker of the liberal opposition party for remarks he made during a National Assembly inspection of the Ministry of National Defense earlier this month.

A group of 22 Saenuri Party lawmakers sponsored the motion to punish Representative Kim Kwang-jin of the Democratic United Party, saying Kim had defamed the country’s veterans.

At the inspection session on Oct. 19, the 31-year-old proportional lawmaker called Paik Sun-yup, the country’s first four-star general who is known for his service during the Korean War, “a traitor of the nation.”

Kim became a subject of controversy after it was revealed he reposted a Twitter message, hoping for President Lee Myung-bak’s sudden death as his New Year’s wish.

In an interview with CBS radio yesterday, Kim said he stands by his words. “It is my clear position that Paik is a pro-Japanese traitor,” he said. “This is not my personal opinion, but a government office made that ruling. So it’s not something to be changed.”

The Presidential Committee for the Inspection of Collaborations for Japanese Imperialism published a list of pro-Japanese officials in 2009 that included Paik for having cooperated with the Japanese military during the colonization period.

Kim also said that hoping for the president’s death was a joke and contended the Saenuri Party was trying to manufacture a scandal for political gain.

The Saenuri Party has asked the DUP and its presidential candidate, Moon Jae-in, to take action against the young lawmaker.

The ruling party also said Moon and opposition lawmakers must agree with Kim’s views because he has not been punished.

The DUP appeared to be concerned that Kim’s comments about Paik might taint Moon’s presidential campaign as the incident recalls DUP candidate Kim Yong-min’s foul language and raunchy jokes during the April legislative elections. Kim angered women, senior citizens and Protestants, and he refused to withdraw from the election despite pressure from the DUP.

The DUP refrained from any direct response to the Saenuri legislators’ attack, but Kim Kwang-jin stepped down from his post in Moon’s campaign as a director in the youth policy senior adviser’s office.

The fire, however, continued to spread. News media reported that Kim made Internet postings from 2004 to 2006 bragging about his parents’ wealth. “My mom will buy me an apartment downtown when I get a girlfriend. Is there anyone who wants to be my girlfriend until I get the apartment?” he wrote in one posting.

After his home-page postings drew criticism, Kim’s aide told the JoongAng Ilbo that they were made eight years ago when the lawmaker was in his early 20s, and there was no need to discuss them now.

According to the National Election Commission, Kim reported assets of more than 2.17 million won ($198,000) before the April 11 legislative election.

He worked as an executive of his father’s tea manufacturing company and since July 2009 as CEO of a wine and tea company.

Kim entered politics last December when the DUP hosted a proportional representation primary to encourage political participation by people aged between 25 and 35. At the time, the DUP had 17,088 delegates and 8,510 of them actually voted. Kim won with 1,245 votes. To ensure lawmaker seats for young politicians, the DUP placed Kim in 10th place on the proportional representative list.