Parties slug it out on extending voting hours

Parties slug it out on extending voting hours 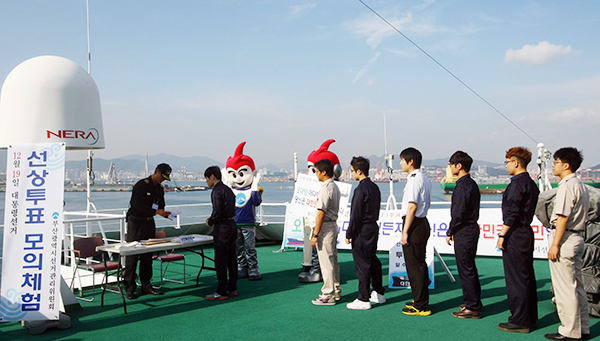 As it stands now, voters will have from 6 a.m. until 6 p.m. to cast ballots on Dec. 19. Election day is a national holiday. Koreans living oversees are allowed to cast ballots from Dec. 5 to 10, and absentee voting for people who can’t vote on Dec. 19, like soldiers, takes place on Dec. 13 and 14.

Moon and the DUP want voting to be extended to 9 p.m., while Ahn wants an extension to 8 p.m.

Quoting a survey by the Korean Political Science Association, Moon said Sunday 64.1 percent of 8.4 million non-salaried workers could not vote because they had to work.

Ahn also said Sunday the 12-hour voting period, established in 1971, has not changed over 40 years and the ruling and opposition parties must revise the election law to allow an extension.

Park said Sunday that it is a matter for the legislature to discuss and decide, but her party made clear yesterday that it didn’t want a change.

“They are arguing for longer voting hours to benefit their campaigns,” Representative Ahn Hyoung-hwan, spokesman of the central election committee of the Saenuri Party. “But they are disguising their purposes as if they were promoting voters’ rights. I see their political intention hidden under a surface of good will.” 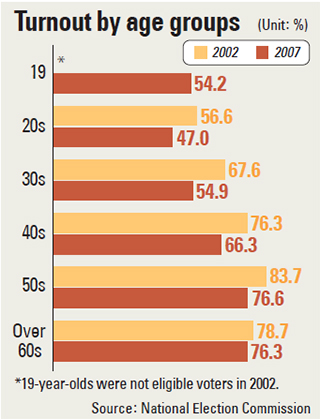 The conservative ruling party also said it is willing to talk about an extension if the DUP agrees to discuss a bill to require a presidential candidate to return state campaign subsidies if he or she decides to drop out of the race.

“To prevent a presidential candidate from just collecting the tax money and giving up a race, we propose the DUP to talk about it along with the voting hour extension at the same time,” Lee Jung-hyun, public affairs chief of Park’s campaign, said.

While Ahn, an independent candidate, is not eligible for a subsidy for his presidential campaign, Moon and Park, backed by major political parties, are eligible to receive money based on the number of lawmakers in their parties. Moon is expected to receive about 15 billion won and the Saenuri Party has argued that he must return the money if he forfeits the race so Ahn can run directly against Park.

The race is tight enough that turnout will clearly be an important factor for the victor.

“If Moon and Ahn manage to consolidate their candidacies, the two-way presidential race will be decided by as few as 200,000 votes and no more than 1 million votes,” said Yoon Jong-bin, a political science professor at Myongji University.

As of late August, the number of eligible voters was about 40.528 million and a one-percentage-point increase in the turnout will mean 400,000 votes.

“When you have longer voting hours, the turnout naturally goes up,” said Shin Yul, a political science professor at Myongji University. “It is political for the liberals to raise the issue toward the end of the campaign, but the conservatives appear to have no clear justification to oppose it.”

The voting hours for presidential elections vary from country to country. France, Germany and Australia have 10-hour voting periods and election day is a national holiday.