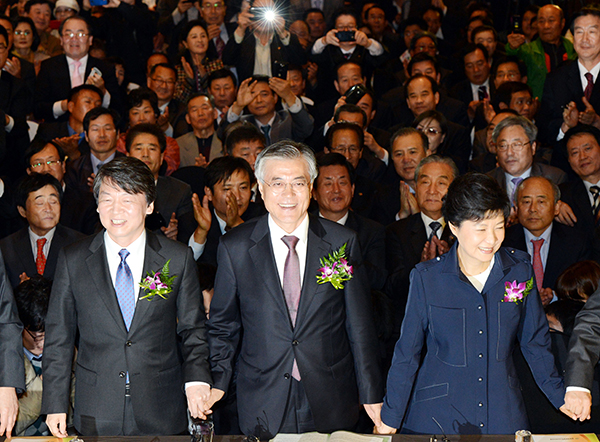 All smiles ­- Three major presidential candidates - independent Ahn Cheol-soo (left), Moon Jae-in of the Democratic United Party (center) and Park Geun-hye of the Saenuri Party - hold hands for a photo yesterday at a rally in Yeouido, western Seoul, to support mom-and-pop stores across the nation. [NEWSIS]


Civic groups and nearly 2,000 members of the Korean Confederation of Trade Unions held a rally Saturday in front of Seoul Station, central Seoul, calling for the elimination of contract, non-salaried jobs. Representative Sim Sam-jeong, presidential candidate for the newly formed Progressive Justice Party, attended the event and gave her support.

“I will put a ban on conglomerates hiring workers on a non-permanent basis,” Sim declared.

With 50 days left until the presidential election as of today, a string of walkouts and rallies by labor unions has taken place, and they are expected to continue until election day with the intention of maximizing leverage over presidential candidates.

And the major presidential candidates and their campaigns have taken notice, and have either attended union events or sent their endorsements for various causes, knowing the importance of support from unions.

“With approval ratings among the major candidates neck and neck, political parties seem to be pouring their energy into attracting groups with particular interests rather than trying to appeal to voters in general with a proper platform,” said Prof. Kim Yun-cheol of Humanitas College at Kyung Hee University.

“Moon Jae-in of the Democratic United Party will pay a visit to the walkout rally, while the independent Ahn Cheol-soo camp told us it will send an endorsement via video,” said Cho Chang-ho, a spokesman of the group.

The third main presidential hopeful, Park Geun-hye of the ruling Saenuri Party, is reportedly considering whether to attend the event to show her support.

The joint labor group is demanding a change in the Ministry of Strategy and Finance’s current practice of setting wages for the employees of the three state-run institutions. The group is also calling on authorities to halt restructuring plans that are supposed to boost efficiency at the institutions.

The planned walkout, however, could be met with punishment if the government considers it unlawful.

“Walkouts that target a change in government polices [rather than improvements in working conditions] are illegal under the law,” said an official of the public sector labor bureau at the Ministry of Employment and Labor.

The joint union says it will go ahead with the Oct. 31 strike regardless of whether it faces punishment. It also declared that it will throw its support to the candidate who is likely to accept its demands once taking office.

“Demands long held by members of unions, which have been rather passively expressed, have flooded out with the presidential election just around the corner,” said Lee Nam-hyeong, an official of the Korea Workers’ Compensation & Welfare Service.

It will not be the first time that several candidates have joined a union rally. The DUP’s Moon and liberal candidates Sim of the Progressive Justice Party and Lee Jung-hee of the Unified Progressive Party attended a rally held by the Korean Government Employees Union at Jamsil Stadium, southern Seoul, earlier this month.

Conservative candidate Park expressed her support by sending a Saenuri lawmaker. Independent Ahn sent a congratulatory video message. The union is not legally recognized and was stripped of its rights as a lawful union in 2009 by the Labor Ministry.

The three candidates’ chumminess with unions is expected to continue next month as unions, such as the Federation of Korean Trade Unions, will hold a protest.