After typhoons, harvest of rice is reduced by 20%

After typhoons, harvest of rice is reduced by 20% 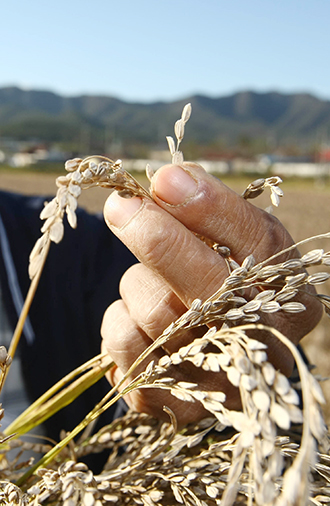 A farmer in Haenam County, South Jeolla, Thursday shows badly damaged rice plants. South Jeolla’s rice crop is expected to be down 20 percent from last year due to typhoons that hit its rice-growing areas this summer, according to the Korean Peasants League. By Oh Jong-chan

At this time of year, the rice paddies should be golden with a crop ready for harvest.

But in Haenam County, South Jeolla Wednesday, the paddies were tinted bizarrely white as wide swaths of the area are plagued by harvests ruined by typhoons that swept southwest Korea this summer.

The country’s breadbasket in Jeolla was directly hit by the typhoons Bolaven and Tembin. The rice crop failed to fully ripen because the paddies were inundated with water at the wrong time.

As a result, this year’s harvest in the regions could be one of the lowest in many years.

“Almost every part of the nearly 9,920 square meters (2.45 acre size) of land that I cultivate was damaged by the tropical rains,” said Choi Jeong-su, a farmer in Haenam County. “I spent the entire season growing rice stalks with empty heads.”

The provinces of North and South Jeolla are home to the fertile Honam Plain.

Haenam, Jindo, Wando and Gangjin counties in South Jeolla are among the hardest-hit while Gochang County, Gunsan and Jeongeup in North Jeolla also reported heavy damage.

“Of the damaged farmlands in Jeolla, about 10,000 hectares can’t produce a single rice head that isn’t empty,” said Park Hyung-dae, an official at the South Jeolla division of the Korean Peasants League. “Over 40,000 hectares are expected to produce less than 50 percent of their usual harvests.”

Park said that more than a 20 percent decline in harvest levels is expected this year.

Farmers’ demands for government relief measures have been growing.

“Over 10,000 square meters of rice that I grow have withered, and all I have received from the government is financial aid of 2.5 million won ($2,280),” said Choi Byung-seok, who works in Haenam County. “With so little government help on the way, I will be heavily indebted at the end of this year.”