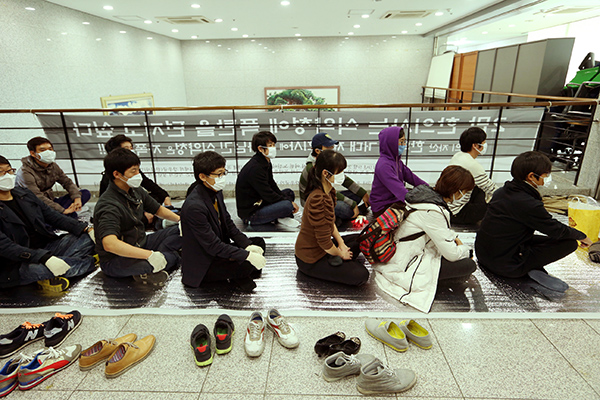 Members of the Association of Korean Medicine continue their sit-in protest, which began Sunday at noon, at the association’s headquarters in Gangseo District, western Seoul, yesterday. Practitioners of traditional Oriental medicine have expressed their opposition to an agreement reached between the government and the association to apply national health insurance coverage to traditional medicines that are prepared by pharmacists. By Park Jong-keun


Dozens of practitioners of traditional Oriental medicine continued their sit-in protest at the Association of Korean Medicine building in Gangseo District, western Seoul, in opposition to the recently signed agreement between the Ministry of Health and Welfare and the organization representing them.

The conflict further escalated yesterday with some of the disgruntled practitioners rushing into the office of Chairman Kim Jeong-gon, throwing eggs at his desk and demanding his resignation.

The AKM reached an agreement with the government to include some Oriental medicines, mainly those prescribed for the elderly and women, in national medical insurance coverage by injecting 200 billion won ($182 million) into the national insurance budget.

The new plan will provide insurance benefits to over 26,000 pharmacists with a license to prepare Oriental medicines. The changes are intended to invigorate the practice of traditional medicine and provide cheaper medical services for patients. Policies are to be implemented in October of next year for the start of a three-year test run.

But the changes have left some upset with the new distribution system. Those sitting in the AKM headquarters say the revised rules provide insurance coverage for traditional medicine prepared by 26,000 pharmacists who do not have the same qualifications as experienced practitioners of Oriental medicine.

“Those pharmacists will have to examine patients to sell the medicine, which goes beyond the authority of their licenses,” said Han Jin-woo, an official at the AKM.

“The agreement will put the soundness of the health care system at risk by granting unqualified pharmacists the right to provide Oriental medicine,” the emergency committee organized by the doctors in protest said in a statement issued Thursday.

The committee also called for a thorough review of the revised rules and claimed the “final decision should be in the hands of special committees of the Association of Korean Medicine.”

“Pharmacists with the license are entitled to make Oriental medicine and thus are subject to receive benefits from the insurance as outlined by the new plan,” countered Park In-choon, vice chairman of the Korean Pharmaceutical Association.

“They need to think about the positive effects the new policies will bring about before calculating their interests,” said an official at the Health Ministry.