To Anish Kapoor, nothing is everything

To Anish Kapoor, nothing is everything 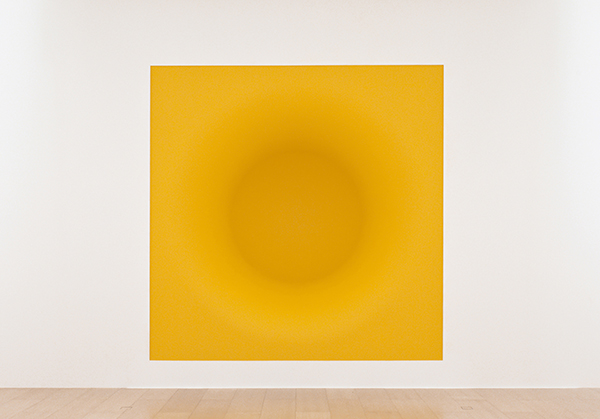 Indian-British artist Anish Kapoor’s “Yellow,” part of his “Void” series, is on display in his solo show at Leeum, Samsung Museum of Art. Provided by the artist and Lisson Gallery


Anish Kapoor is one of the world’s hottest sculptors. Even people with no interest in contemporary art have marveled at his “Cloud Gate” installed in Chicago’s Millennium Park.

Images of the giant bean-shaped stainless-steel sculpture whose super-sleek surface reflects and distorts the sky and cityscape have fascinated Korean bloggers who collect cool images.

Last week, the 58-year-old India-born British artist kicked off his first solo show in East Asia at Leeum, Samsung Museum of Art in central Seoul. It consists of 18 works, including his early “Pigment” series and latest stainless-steel sculptures as well as his “Void” series of the 1990s. Leeum says the selected works show the “essence” of the artist’s philosophy.

One of the “Void” series on display, “Untitled”(1990), will give viewers a sense of Kapoor’s philosophy with its three hemispheres covered with dark blue pigment. The concave sections of the hemispheres are dark, surprisingly without any tinge of light, so viewers experience the wonder and fear of unfathomable depth.

“They are not empty spaces. They are spaces filled with darkness, the darkness we all carry within us,” Kapoor said during a talk at Leeum last Thursday.

The voids in his artwork are spaces of simultaneous “nonexistence” and “existence,” nonphysical, nonmaterial things like darkness, infinity and human feelings. 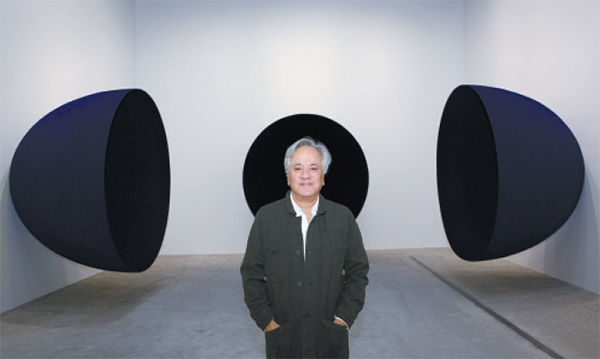 Anish Kapoor and his 1990 work “Untitled” installed at the Leeum, Samsung Museum of Art. [YONHAP]


Viewers’ perception of the non-physical qualities and their feelings about them are an important part of his works. According to the artist, “Untitled” is completed only when a viewer stands surrounded by the three hemispheres. “I think there are four of them,” he said. “The fourth one is the viewer.”

Kapoor also said his “Void” series evokes a feeling of “tumbling into deep darkness, an unformed womb from where we have come.”

This work and several others on display are related to maternity, birth and life, rather than eroticism. Such works include “When I Am Pregnant,” a white convex form from the museum wall, which could pair with “My Body Your Body.”

And the biggest one among the “Void” series on display at Leeum, the 1999 work “Yellow,” leads viewers to feel like they have sucked into a whole new space full of light. 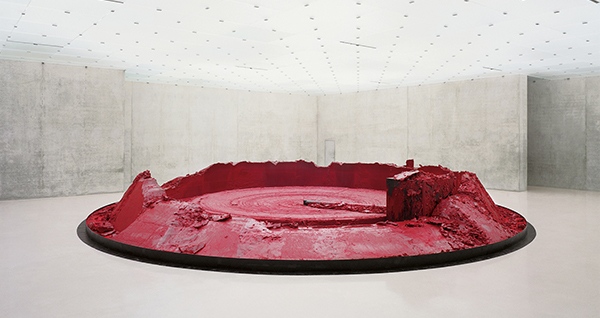 Kapoor’s 2003 work “My Red Homeland,” also part of the Leeum show. Provided by the artist and Lisson Gallery


That is the effect that Kapoor wants his works to create. When asked why he makes his works so large, he said it helps viewers feel “the sublime.” Of course, it cannot be achieved only by making things big. Visitors to the Leeum exhibition will see how elaborately Kapoor’s works are finished in order to produce his desired effects.

Kapoor’s stainless steel sculptures since 2000, which include “Vertigo V & VII” and “Tall Tree and the Eye” on display now at Leeum’s garden, as well as the famous “Cloud Gate,” are also related to the coexistence of physical and nonphysical things.

“Such sculptures exist physically, but what the viewers see are not the sculptures themselves, but the images reflected on their mirror-like surfaces - nonphysical ones,” said Tae Hyun-sun, chief curator of Leeum.