Ahn Cheol-soo at a crossroads

Ahn Cheol-soo at a crossroads 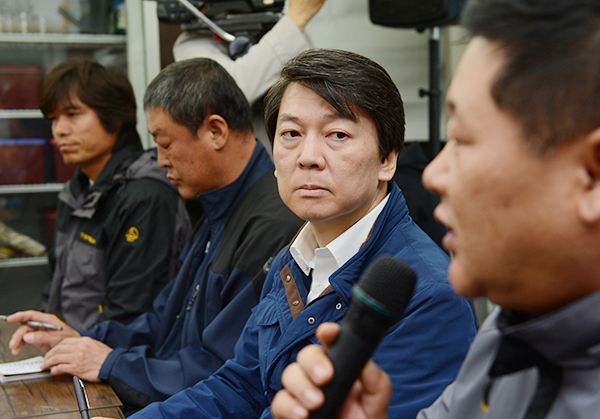 All eyes are on the question of unifying the candidates - Moon Jae-in of the opposition Democratic United Party and independent contender Ahn Cheol-soo - and the result will determine the presidential election. The supporters promoting the opposition merger believe it is the way to victory, while opponents think that if they don’t merge they will win. The liberal camp urges opposition candidates to merge in the name of the people while branding any critics of the merger as supporters of the ruling Saenuri Party. Once the runners announce their candidacies, they can follow the decisions of the voters. Then why are they arguing over unifying the candidates behind the curtain? The problem is Ahn’s attitude. He needs to stop being ambiguous.

Ahn has to make a clear decision, as it is directly related to his identity. Where did his popularity come from? It originated from distrust and disgust over existing politics. People hoped he would be different from established politicians. He has promised to reduce the number of National Assembly representatives and change the political party subsidies system. But both the ruling and opposition parties opposed his pledges. They have been arguing over just about every issue, but why are they having the same opinion on this matter?

Why are they opposing the proposal to change politics? It is only natural that we need party politics to operate a representative democracy. Have Korean political parties been playing appropriate roles? Under the ideological banners of conservatives and progressives, the politicians who are blinded by power and pursuing success have been fighting in groups without any vision for the nation’s future.

In fact, politics have been impeding the country’s advancement. Just as children need bigger clothes as they grow up, a country needs a new system to accommodate its growth. We need to change the outfit of our politics. Ahn is the symbol of such a desire.

Political reform and candidate unification are incompatible with each other. The merger is a political collusion and a game of power. Established politicians have repeated the game in every presidential election, and the citizens had no say there. We need to judge the merger properly. Is it fair to join with another politician just to win the election when the two have different ideologies and ideas?

Therefore, at the moment Ahn agrees on the merger, his political reform will become empty words. Let’s say the opposition party agrees on political reform to seize power. Will the promise be kept after the election? Let’s say Ahn is elected. When the opposition party has the majority of the National Assembly, will his reform plans be accepted? When the wrong method is chosen, the purpose cannot be attained. The means may destroy the ends. This is where Ahn’s dilemma lies.

He is on the test bed. His identity will be revealed depending on which path he takes. One is a wide road with power at the end. The other is a narrow path to ideals. If he was someone who seeks power, the young Koreans would not have raved about him so much. The young voters chose him because they want changes.

If he is chosen for that reason, his journey will not be easy and comfortable. Being chosen is accepting adversity. It involves fear and burdens. It takes great courage to take on the load of adversity, and an average person would be reluctant to sign up for the task. Once he has embraced the selection and announced his candidacy, he has to be responsible for himself to the end.

Existing parties may have reasons to oppose political reform. They believe that they can benefit by maintaining the current situation. They are defending their vested rights, and changes mean breaking their vested interests. How can the establishment be destroyed? Having vested interests means having power, so they cannot be pulled down by power. But the desire of citizens and the moral superiority of the leader can break down the vested interests. Ahn was born from the desire of people hoping for political innovation. He was a fresh figure because people believed in his morality.

Let’s say Ahn remains an independent and is elected president. Existing political parties would find themselves in the middle of a storm. The voters would have proven how great their desires for political reform are.

And the passion of the citizens will be converted into the power of the new president. The boundary between the ruling party and the opposition would collapse, and a new power pursuing new politics would emerge. There may be transient uncertainty, but a new path will open up for Korea.

Changes and reform approach in an unexpected way. Of course, he may fail. But the truth never disappears. Truth has a real vitality. A seed bearing a life will sprout in the end. Just by planting the seed, he is playing a pivotal role in history. But if he chases reality, he may disappear just like any other third figure has in the past.