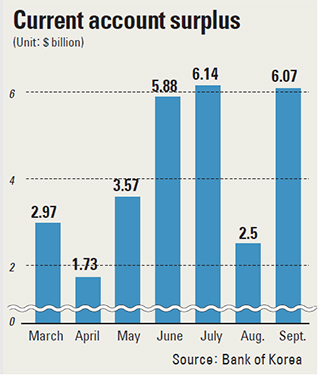 Korea’s current account surplus widened in September from the previous month as exports expanded at a faster rate than imports to help offset the impact of the strengthening won, the central bank said yesterday.

The September figure was the largest monthly surplus since a record high of $6.14 billion in July, and September marked the eighth straight month in the black.

In the first nine months of this year, the cumulative current account surplus reached $28.5 billion, leading the central bank to upwardly revise its full-year surplus estimate to $34 billion from $20 billion.

Despite weaker exports and slowing economic growth, the local currency has appreciated more than 5 percent to the dollar this year as foreign capital continued to flow into Korea amid quantitative easing by major economies.

Exports, which account for about 50 percent of the local economy, remained vulnerable due to the global economic slowdown. Imports are also falling as domestic demand weakens.

On a customs-cleared basis, exports posted an on-year decline for the third month in a row in September.

The BOK said goods surplus hit an all-time high of $5.64 billion in September as exports rose at a faster pace than imports.

The service account, which includes outlays by Koreans on overseas trips, posted a surplus of $323.3 million last month, a turnaround from a shortfall of $262.2 million in August.

The primary income account, which tracks wages for foreign workers and dividend payments overseas, logged a surplus of $203.9 million in September, down from $435.5 million in August.