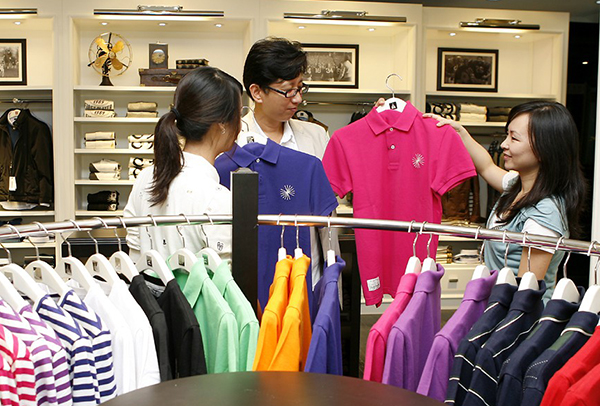 Shoppers at a Bean Pole store in Ba Bai Ban Department Store in Shanghai. The brand entered China in 2005. Provided by Cheil Industries


Korean fashion houses are taking their best-known labels to luxurious department stores in top-tier Chinese cities and adding higher price tags in an attempt to brand themselves as purveyors of luxury goods.

“As the fashion houses are now becoming well-acquainted with Chinese consumers, it is important to let them know that Korean fashion offers high-quality designs and fabrics,” said Yang Hee-jun, assistant director of communications team at Cheil Industries, best known for its casual brand Bean Pole.

“Regardless of how well-known we are in Korea, we’re still newcomers in China so we’re trying to make a strong first impression.”

Due to the size of the overall market in China, targeting bigger spenders with high prices can still net more customers than the size of Korea’s entire population, Yang said.

As such, many labels sell their garments for up to 70 percent more there than in Korea, according to An Jeong-eun, the assistant director of SK Networks’ communications team.

Since SK Networks took its fashion business to China in 2009, sales have rapidly caught up with those in Korea in terms of revenue. From sales of 10 billion won ($9 million) in 2009, the company now expects to earn 50 billion won this year in China, making up half of its total revenue. 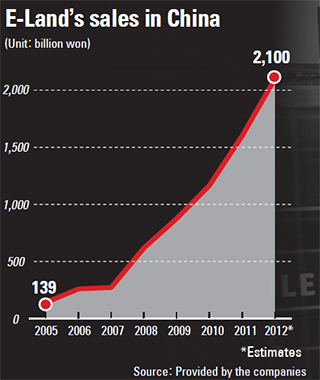 The company made an impact on the Chinese market in 2009 with its young casual brand O’2ND, which was launched in Korea in 1997.

“As Chinese consumers have become keenly attuned to the latest fashion trends recently, we didn’t really specify our target consumer in terms of age for the label there,” said An, adding that the label appeals to a broader demographic in China than in its country of origin.

China’s fashion market was worth 100 trillion won last year and is forecast to keep growing at an accelerated rate, according to the company.

SK Networks has opened outlets for numerous other Korean brands at major high-end department stores including New World in Beijing and Ba Bai Ban in Shanghai.

“One of the ways to get a grip on the market is to localize our products through luxury retail outlets,” said An.

The company is also busy spreading the word that O’2ND has introduced its designs at luxury stores in fashion centers like New York.

Cognizant of the brands’ pricing policies, more Chinese are now traveling to Korea to stock up on the same products at a lower cost, An said. This mirrors a trend Koreans have been doing for years by buying designer labels directly from Europe or the U.S.

“We cannot say for sure what share Chinese buyers account for among our sales in Korea, but we know it’s growing,” she said.

Bean Pole, Cheil Industries’ flagship brand in China, promotes itself as a one-stop shop for the whole family on the mainland, whereas it separates its men’s, women’s and accessory lines in Korea.

“We also foreground more colorful and trendy items in our display in China as shoppers there respond very well to this,” the company said in a recent statement.

Bean Pole was launched in China in 2005 and is set open 30 more stores this year, making a total of 145 in the country. It aims to have China make up at least 30 percent of its total sales within the next five years. To this end, it has formed a team designing products specifically for Chinese consumers.

“Since Chinese prefer the color red, we use more of this in our designs now,” the company said. “We also introduce pants and skirts that are not pleated, just the way they like them.”

Meanwhile, its casual women’s label Alcee will make its international debut in China next month.

Yang of Cheil Industries said Korean companies generally prefer expanding their presence in China rather than in the U.S. or Europe because the Chinese have similar body shapes.

“Our clothing designs may not be a perfect fit for non-Asians as the sleeves or pants may be too short,” he said. “So it’s a comparatively easy market for us to target as we don’t need to change the basic fit we’ve already tested on local consumers.”

E-Land, the most successful Korean fashion company in China, has also positioned itself as a luxury casual brand there. Now it plans to move further upscale as it is set to launch recently purchased foreign accessories brands including bag maker Mandarina Duck, leather designer Coccinelle and shoemaker Sutor Mantellassi.

“We’re keeping our business portfolio upscale and diverse as we bid to reach sales of 10 trillion won in China by 2020,” said Hwang Woo-il, a PR official at Eland.