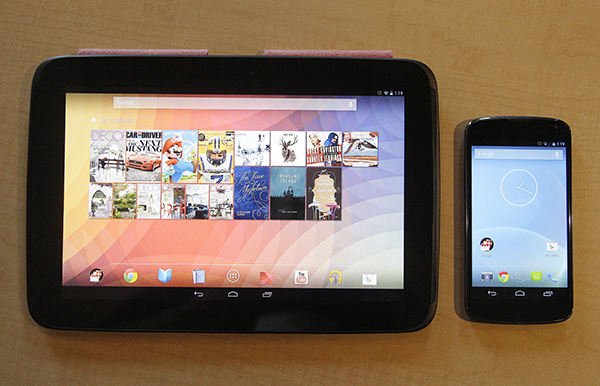 The Nexus 10 tablet, left, and the Nexus 4 smartphone are shown at a Google function in San Francisco, Monday. [AP/YONHAP]


Korean electronics giants Samsung Electronics and LG Electronics yesterday unveiled new mobile devices to be sold by Google under its Nexus brand, a move that is expected to help the two manufacturers gain market share and the search giant bolster its Android operating system.

Samsung unveiled a 10.1-inch Nexus 10 tablet PC, while LG announced a 4.7-inch Nexus 4 smartphone, the two companies said in separate statements. Both are powered by Google’s latest Jelly Bean operating system. While Samsung has previously made smartphones for Google’s Nexus brand, this is LG’s first collaboration with the U.S. search giant, whose Android platform is competing against Apple’s iOS.

The Nexus 4 phone runs on Qualcomm’s Snapdragon S4 Pro quad-core processor which runs faster than existing chips, according to LG. The phone also comes with new user functions, such as a “Photo Sphere” function that allows users to take 360-degree images, the company said.

The Nexus 4 phone will be available at online Google Play stores in the United States, Britain, Australia, France, Germany, Spain and China, while the Nexus 10 tablet PC will go on sale on the same date at Google Play stores in the U.S., Britain, Australia, France, Germany, Spain, Canada and Japan, according to the official Google blog.