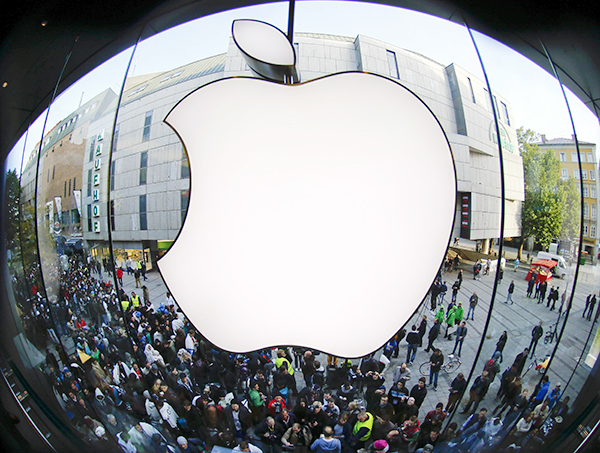 Customers gather outside an Apple store before the release of the iPhone 5 in Munich early Sept. 21.[REUTERS/YONHAP]


Due to a hiccup involving bandwidth certification, the release of the iPhone 5 will be delayed by at least another week in Korea, meaning local consumers are unlikely to get their hands on one until Nov. 9 at the earliest, and even this date is considered extremely optimistic.

Apple Korea has filed a third application for authorization of a frequency band for its latest smartphone with the National Radio Research Agency (NRRA), which operates under the Korea Communications Commission (KCC), industry sources said Monday.

In Korea, foreign mobile devices must register their frequency bands with the Korean watchdog and obtain the necessary approval.

The Korean office of the U.S. tech titan initially got the green light late last month for the gadget, which was unveiled globally on Sept. 12. After the authorization was cancelled for unknown reasons, the KCC again gave it the nod on Oct. 10.

However, this was automatically nullified as Apple Korea filed a fresh application after it found it had wrongfully filled in the frequency band for SK Telecom’s 3G mobile connectivity, SK Telecom said.

SK Telecom is set to adopt frequency bands of between 2.1 gigahertz and 60 megahertz for the new smartphone, which will be released in Korea with two types of connectivity: 3G and the super-fast 4G LTE. But Apple Korea has only applied for the 40 gigahertz band for the 3G connection, the carrier claimed.

Apple Korea corrected the mistake on its third application, but it usually takes up to five days for the authorization process to be finalized. Industry insiders earlier predicted the phone would be available in the country this Friday.

Regarding the last edition of Apple’s hit product, the iPhone 4S, the company unveiled it in the U.S. on Oct. 4, 2011. It received authorization from the RRNA on Oct. 27 and the handset hit Korean stores on Nov. 11, about five weeks after its debut.

But the iPhone 5 has required over six weeks just for the authorization process. In contrast, the model sold over 5 million units worldwide on its first weekend, as Tim Cook proudly announced last week while introducing the iPad mini, together with the fourth-generation iPad and a few more new products.

Now the iPad mini and new iPad are almost certain to debut on the Korean market earlier than the iPhone 5, given that they have already received the required frequency authorization. For the first time, Korea is among the first batch of countries to receive shipments of the two gadgets. Under the current schedule, their offline sales are due to start Friday.

Speculation has been rife that the iPhone 5 is suffering a supply shortage due in part to the recent strike at a Foxconn manufacturing plant in China. Whether that is also affecting the timing of the device’s launch in Korea could not be confirmed by either SK Telecom or KT, the two mobile carriers set to sell the iPhone 5.

Rumors have also been swirling in recent days that SK Telecom is to blame for the later-than-expected arrival of the smartphone. In response, the nation’s top mobile carrier made several statements to clarify its position on its official blog on Monday.

“The reason why we could not reveal the release date of the iPhone 5 and come up with answers to an array of questions from customers is because Apple decides the date of release and supply volume and we are awaiting its decision,” ran the bold-print message.
“Of course we are annoyed by the delay,” said a KT spokeswoman. “But we don’t know yet who to blame.”
Meanwhile, Apple CEO Tim Cook on Monday replaced the heads of the company’s software and retail units in what amounts to its biggest executive shake-up in a decade. The reshuffle comes on the heels of embarrassing problems with its new mapping program and unpopular decisions related to its stores.

Software chief Scott Forstall, who oversaw the launch of the flawed mapping software this summer as well as the much-criticized Siri voice-enabled assistant, will leave Apple next year.
Forstall, seen as a polarizing figure inside Apple, had been billed as one of the future candidates to take over the helm of the company.

Apple said in a statement that retail chief John Browett “is leaving,” without elaborating. It said a search for his replacement is underway, and that the retail team will for now report directly to Cook. Browett caused a stir earlier by reducing the number of employees in his unit.

The departures come a little more than a year into Cook’s tenure as chief executive. He replaced late Apple founder Steve Jobs, giving him enormous shoes to fill.

“These changes show that Tim Cook is stamping his authority on the business,” said Ben Wood, an analyst with CCS Insight. “Perhaps disappointed with the Maps issues, Forstall became the scapegoat.”

Apple upended the tech industry with the release of the iPhone in 2007. But the company is facing increasing competition from search giant Google as Android has become the world’s most popular mobile software. It is also dealing with threats from Amazon.com, Microsoft and Samsung.

“Competition is moving much faster to be more Apple-like,” said Tim Bajarin, president of technology research and consulting firm Creative Strategies. “They’re finding they need to streamline the management team in order to get things going faster.”

Apple’s launch of its own mapping service in September, when it began selling the iPhone 5 and rolled out its updated iOS 6 software, led to widespread user complaints, particularly since it replaced the popular Google Maps.

Apple’s Siri personal assistant software also came under a lot of criticism, such as not providing information on business locations, when it was launched last year.

Both the services were introduced with much fanfare by Forstall, who had supervised their development as senior vice president of iOS software.
The executive changes hand substantially more responsibility over to Eddy Cue, the head of Internet Software and Services who helped create the iTunes music store and App Store.

The 23-year Apple veteran is already in charge of Cloud services and will take on Apple Maps and Siri. Craig Federighi will oversee Apple’s mobile iOS software as well as its OS X Mac software, Apple said.

Another executive who will get more responsibility is Jonathan Ive, head of industrial design, who has played a key role in Apple’s success by imbuing its gadgets with their distinct look and feel.