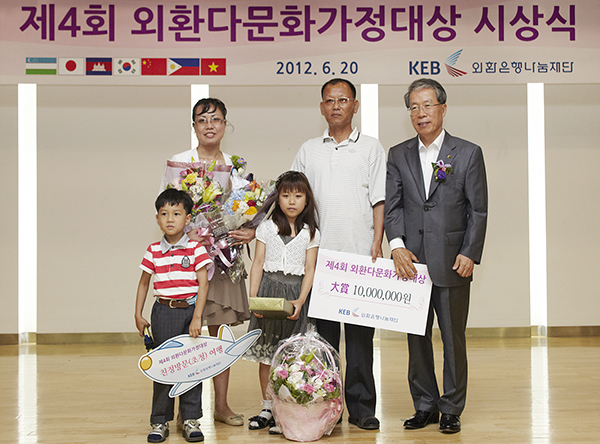 President and CEO of KEB, Yun Yong-ro (right), poses with awardees of the KEB Multi cultural Family Award this June.

In December 2005, for the first time among Korean banks, KEB has founded a public charity that addresses the issues surrounding the social welfare system and is approaching the community service project with a long-term goal of sustainable welfare. The foundation is conducting continuous and well-organized social contribution work.

One of the main activities of KEB that are linked with its image as an international bank representing Korea focuses on helping multicultural families. Since 2008 it has started a project of granting immigrant women on a trip to their home country. In June 2009, it has first launched the KEB Multicultural Family Award, a national-scale award. In June this year, it held the fourth awards ceremony. The winners will receive 10 million won award and a trip to their home country or the expense support for families to visit Korea.

As an international bank representing Korea, KEB is actively conducting a wide range of international social contribution activities such as surgery and disease treatment for children suffering from poverty and participating in relief activities in international disaster areas. Using the 50 overseas operations across 21 countries is one of the merits of KEB and private companies’ role in improving the status of Korea, a member of the OECD.

One of the main cases is when the KEB employees and customers donated 100 million won together with the KEB Sharing Foundation to World Vision, a relief agency, back in February 2010 to help Haiti recover from the deadly earthquake.