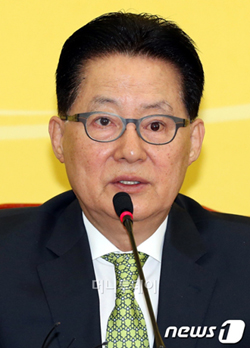 The largest opposition party yesterday issued an apology to the nation for a young lawmaker’s lewd and offensive Internet posts, as the ruling party demanded the representative give up his seat over his conduct.

Kim was discovered to have tweeted details about sexual fantasies, including role play and bondage, as well as calling a decorated military officer a traitor.

“I am deeply sorry,” Park said during a party meeting. “Although he used some inappropriate expressions on social networking services before he became a lawmaker, he is still a lawmaker of our party and as floor leader, I apologize to the people.” 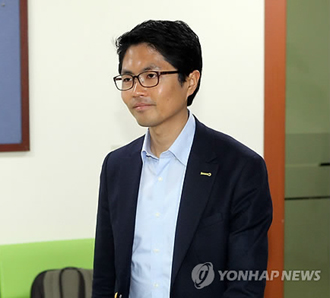 Park also said the party gave numerous internal warnings to Kim to restrain himself and keep a low profile, but Kim failed to do so by defending his position in a media interview.

“Regarding this, I gave him another warning this morning,” Park said. “I made it clear that Kim must be serious about self-restraint and self-reflection and I hope the public will show some understanding.”

The 31-year-old lawmaker, who became a proportional representative for the DUP in the April 11 legislative election, faced fierce criticism from the ruling Saenuri Party after calling Paik Sun-yup, the country’s first four-star general known for his service during the Korean War, “a traitor to the nation” during a legislative inspection of the Ministry of National Defense on Oct. 19.

Since then, a series of Kim’s provocative remarks was revealed and the Saenuri Party asked the legislature to take disciplinary action against him.

While Kim is a member of the National Defense Committee for the legislature, the lawmaker wrote on Twitter in June of last year that the North has been more trustworthy over time than the South, including on issues like the sinking of the warship Cheonan, the shelling of Yeonpyeong Island and dealings between the two Koreas.

That triggered the ruling party and conservatives to question his national security values.

Local media and the ruling party continued to dig up more scandalous Twitter postings the lawmaker has made. On Dec. 28, 2010, Kim posted “I love slaves and things like that. Let’s take the clothes off first. Handcuffs and whips.” On Dec. 1, 2010, he tweeted “Make sure you bring a whip and handcuffs when we go drinking next time. A school uniform and a nurse uniform as well.”

Kim continued to use Twitter even after he became a lawmaker. He tweeted on Oct. 4 that “People might think that I’ll hit you with a whip if you don’t cook well. Don’t be afraid.”

Ironically, Kim sponsored bills to reinforce the punishment on sex crimes and protection of sex crime victims this year.

The Saenuri Party quickly used the newly found messages to attack the DUP and its presidential candidate Moon Jae-in.

“They seemed like postings you would only see in a community of sexual perverts,” said Jeon Gwang-sam, deputy spokesman for the Saenuri Party’s central election committee. “The DUP must make a bold decision to remove the pervert lawmaker, instead of protecting him.”

Kim stepped down from his position with Moon’s campaign on Friday after the scandal over his tweets started. The Moon campaign said the resignation was effective immediately, trying to distance the presidential candidate from the scandal.

The conservative ruling party continued its attacks on Kim yesterday. A group of Saenuri lawmakers held a press conference and pressured Kim to give up his lawmaker post and apologize to the people.

“Kim not only lacks basic personality traits, but showed extremely dangerous and inappropriate character traits and values to work as a lawmaker,” the Saenuri lawmakers said in the statement.

“The DUP praised this man as a representative of the young voters and gave him the proportional lawmaker seat. He, however, insulted millions of our youngsters and disappointed them.”

The Saenuri lawmakers also said the DUP must be held accountable for selecting Kim as its proportional lawmaker and pressured the party to forfeit his seat.

The ruling party also said the case reminded it of the Kim Yong-min scandal of the DUP in the April legislative elections and urged the opposition to take quick action.

On the eve of the legislative election, Kim Yong-min’s foul language and raunchy jokes angered women, senior citizens and Protestants, but he refused to give up his candidacy despite pressure from the DUP.

The scandal largely tarnished the DUP’s image in the elections and the DUP floor leader Park’s apology yesterday showed the party was making efforts to not go through the same nightmare before the presidential election.