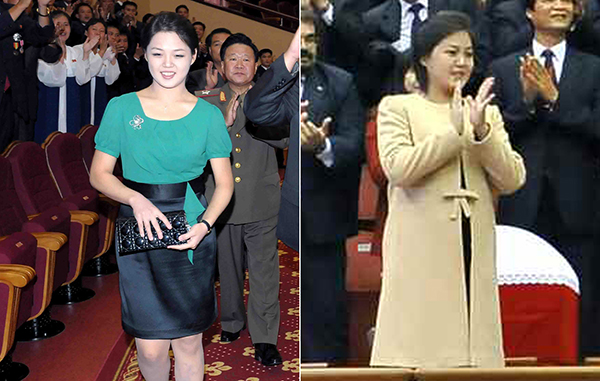 North Korea’s first lady, Ri Sol-ju, who hasn’t been seen in the press for the past two months, appeared on Monday as pictured on right with a possibly swollen belly watching a performance by the Moranbong Band to celebrate the 60th anniversary of the founding of Kim Il Sung Military University in Pyongyang. Ri’s shape is different from an earlier photo taken on Aug. 30. [YONHAP]


North Korea’s first lady, Ri Sol-ju, who hasn’t been seen in the press for the past two months, appeared on Monday with a possibly swollen belly, igniting speculation that she is pregnant. 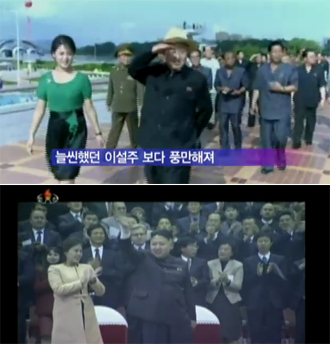 The regime’s Korean Central News Agency and the ruling party’s mouthpiece Rodong Sinmun yesterday released a series of photos of Ri attending a performance of the Moranbong band marking the 60th anniversary of the founding of Kim Il Sung Military University.

In the photos, Ri is sitting in the front row of the performance hall to the right of her husband, North Korean leader Kim Jong-un. She is wearing a beige winter coat left open slightly as if her belly is swollen.

Ri hasn’t appeared in the state-controlled media for about 50 days since she made her last appearance on Sept. 7 when she paid a visit to the Pyongyang Folk Park.

The National Intelligence Service, the South’s spy agency, said at a parliamentary audit Monday that the reason why Ri had not been shown in public was because of “her pregnancy” and concerns about “her liberal style that has a negative influence on public morality,” ruling party lawmaker Yoon Sang-hyun, who was at the audit, told reporters.

The NIS reportedly said at the closed-door audit that Pyongyang is attempting to get the support of the public by publicizing the 23-year-old first lady’s activities, which is unprecedented in the reclusive regime.

At the same time, the regime is also reportedly trying to confiscate photos or videos of Ri from when she was a famous singer, the NIS said, in order to scrub her past.

In July, the NIS said at a parliamentary meeting that Kim and Ri apparently married in 2009 and that the couple have one child, two ruling party lawmakers told reporters.

“Speculation has been high that she is pregnant,” said Yang Moo-jin, a professor at the University of North Korean Studies. “She seems to have taken a break for the past weeks and then reappeared.”