Representative Suh Sang-kee of the ruling Saenuri Party made an official request yesterday to Korea’s spy agency to give lawmakers access to a transcript of a secret meeting between late President Roh Moo-hyun and former North Korean leader Kim Jong-il in 2007. 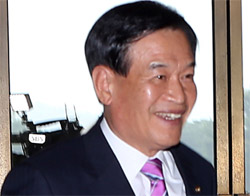 The National Intelligence Service confirmed Monday that it has a transcript of the secret meeting at the 2007 inter-Korean summit in Pyongyang. According to Suh, it wants ruling party and opposition lawmakers to come to an agreement before it will allow Intelligence Committee lawmakers to review the transcript.

Another Saenuri lawmaker, Chung Moon-hun, has made the bombshell allegation that Roh disavowed the Northern Limit Line, the disputed maritime boundary between North and South Korea, during the secret meeting with then-leader Kim at the summit.

The allegation has rocked the presidential race because the Democratic United Party’s candidate, Moon Jae-in, Roh’s chief of staff at the time, was the South’s chief organizer for the summit. Chung’s allegation portrays Roh and his allies as being pro-North Korea, even on such issues as the de facto maritime border.

Moon has said no transcripts exist.

Suh sent an official request for the document to the NIS yesterday under his name.

“The issue will be resolved simply if the NIS chief confirms whether or not former President Roh made such remarks [about the NLL] in front of the Intelligence Committee members of the ruling and opposition parties, but I don’t get why the DUP is opposing even reviewing the transcript,” said Park Sun-kyu, spokesman of ruling party presidential candidate Park Geun-hye’s campaign team, yesterday.