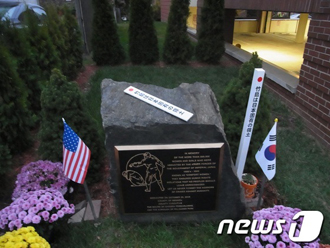 Nobuyuki Suzuki, a 47-year-old right-wing Japanese activist, confessed on his blog on Monday that he was the one who planted a white wooden stake claiming Japan’s ownership of Dokdo, Korea’s easternmost islets, in front of the Korean consulate in New York and next to a historic monument in New Jersey last week.

“In the morning of Oct. 26, I planted a wooden stake that had written on it ‘Takeshima is Japanese indigenous territory’ next to a monument that commemorates prostitutes in Palisades Park, New Jersey,” Suzuki wrote. “On the same day, I put a sticker [with the same message] underneath the entrance signboard of the Korean consulate in Manhattan, New York.”

The activist also confessed that he placed a similar white wooden post in front of Korea’s consulate the following day.

Suzuki’s posting on his blog comes several days after American police began investigations into recent provocative acts. James Rotundo, mayor of Palisades Park, said previously that the perpetrator will be prosecuted if the action is deemed a racist or biased crime. In June, Suzuki also planted a similar stake with the same message next to the Peace Monument in front of the Japanese Embassy in Junghak-dong, central Seoul, which commemorates Korean women who were forced into sexual slavery by the Japanese military during World War II.

A group of former Korean sex slaves, also known as “comfort women,” sued Suzuki for defamation and the prosecutors issued a summons last month. The activist, however, denied any wrongdoing and did not appear before the prosecutors, saying he “is too busy.”

On his blog on Monday, Suzuki also referred to forced sexual slavery as “voluntary prostitution,” saying that what Korea is arguing is not based on facts. Some 200,000 Korean women were forced into sexual slavery by the Japanese military.