Propofol-pushing doc indicted with a customer

Propofol-pushing doc indicted with a customer 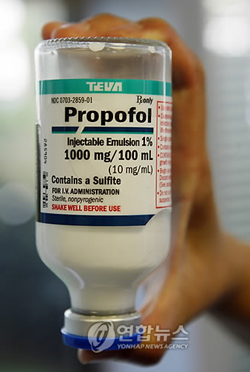 Prosecutors indicted a cosmetic surgeon who was trying to get out of debt by illegally administering drugs like propofol to addicts in Gangnam, southern Seoul.

The prosecution also indicted two hospital staffers surnamed Cho and Jang on the same charges and charged a 27-year-old woman surnamed Kim who was allegedly a propofol customer of Cho’s.

The prosecution said Cho ran a plastic surgery clinic in Gangnam that was shut down in 2009 after a patient died of a propofol overdose. Since then, Cho has done surgical procedures on former patients at borrowed spaces in Gangnam clinics.

But to pay his debts, he also allegedly ran a side business illegally administering propofol and midazolam, drugs used in surgeries, and ketamine, a horse tranquilizer used to get high, the prosecution said.

Some people have gotten hooked on the drugs after medical procedures. Medical workers are also known to take the drugs to feel rested, as Michael Jackson did.

Cho allegedly gave shots of propofol, midazolam and ketamine to six people including Kim on 16 different occasions in September at motels and their houses in Gangnam.

Allegedly, Cho received 9.3 million won ($8,500) from his customers and was promised an additional 46 million won.

Cho is also suspected of smuggling 20 bottles of propofol to Shanghai on 10 different occasions from January to September.

One of his staffers who was indicted, also surnamed Cho, allegedly sold 90 bottles of propofol on 14 different occasions from April to October to a woman identified as Lee. In return, she received 27.6 million won in cash, Hermes and Prada bags and diamond necklaces.