Coach Choi says Jeonbuk protege may be back

Coach Choi says Jeonbuk protege may be back 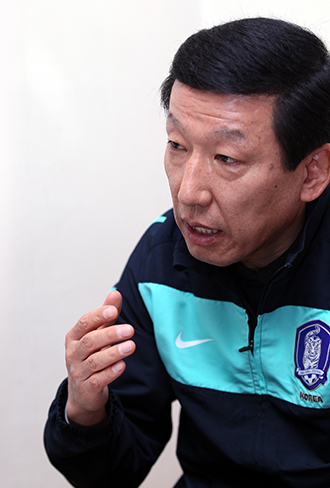 Coach Choi Kang-hee of the national football team hinted that he may bring back his beloved Jeonbuk Motors protege Lee Dong-gook for Korea’s next FIFA World Cup qualifier versus Qatar in March.

Lee, the most prolific striker in the domestic K-League, was left off the roster against Iran last month when Korea succumbed to the 10-man hosts in a 1-0 defeat.

“Even when a foreign coach manages this team, there are only three authentic strikers to choose from the current pool - Lee Dong-gook, Park Chu-young and Kim Shin-wook,” Choi said in a recent interview with the JoongAng Ilbo.

Park, 27, of Celta Vigo, and Kim, 24, of Ulsan Hyundai, led Korea’s offense against Iran from the start for the first time since Choi took the helm in February, but failed to create scoring opportunities.

Choi said he excluded Lee, 33, from the Iran match in part to give him a rest after struggling in recent months.

“It’s not like players like [Cristiano] Ronaldo or [Lionel] Messi suddenly show up for us,” the former Jeonbuk coach said. “Should I call Didier Drogba and ask whether he intends to become a naturalized Korean citizen?

“After all, we have to find a good combination among our three.”

Korea still leads the five-team Group A in the final qualifying round for the 2014 Brazil World Cup, but with four matches left, the two berths to the quadrennial event are up in the air.

Both Korea and Iran sit atop with seven points on two wins, one draw and one loss with Korea ahead on goal differential. Uzbekistan is alone in third with five points while Qatar and Lebanon, the two bottom teams in the group, are within striking distance with four points.

“If I liken the final qualifying stage to a 90-minute football match, we only finished the first half behind 1-0,” the 53-year-old coach said.

His sense of Korea trailing in the group is relative to his initial goal. He said that he wanted to earn 10 points from the first four matches. He said he expects the berths to go to teams with 14 to 16 points.

He said that the upcoming game versus Qatar will be a significant chance to turn around the dampened mood for the Taegeuk Warriors. He said he will not be complacent despite three upcoming home matches.

“There is a high likelihood that the opponents will come up with aggressive plays. To deal with it, we need to score first,” he said.