‘QE3 only works as a prelude to structural change’

‘QE3 only works as a prelude to structural change’ 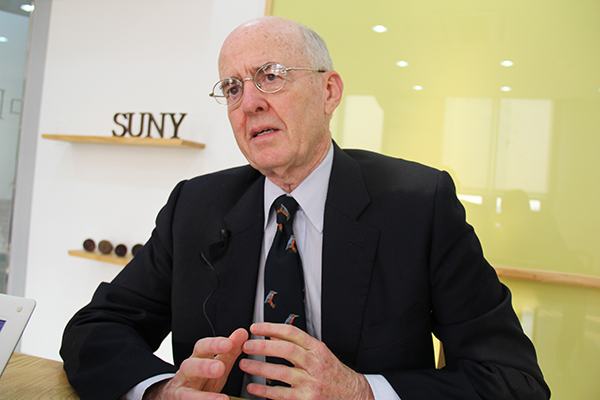 
The U.S. government must structurally rework its domestic market as the Fed’s third round of quantitative easing (QE3) was a necessary and successful, but only stop-gap, measure to stimulate the economy, according to Arthur Sculley, a senior fellow at the Center for Emerging Market Enterprises at the Fletcher School. The institute, which is affiliated with Tufts University, was established in 2007 as the first professional graduate school of international relations in the U.S.

“[Such measures] ease the pain, but they don’t solve the problem,” Sculley said in a recent interview with the Korea JoongAng Daily. “They’re necessary, but by far the more important issue is structural change, which has been needed in the U.S., and in Europe in particular.”

Sculley was visiting the Korean campus of the State University of New York in Songdo, Incheon, to give a lecture.

“Investing in infrastructure and education to job training, and getting credit to small- and medium-sized enterprises, will turn economies around in the longer term,” Sculley said. “It’s going to be another five years before we [in the U.S.] work ourselves through this problem.”

After graduating from the Wharton School of the - Ivy League - University of Pennsylvania in 1967, Sculley served as the CEO at JP Morgan Private Bank, where he spent 25 years until 1995 covering Asia including Hong Kong, Singapore and Korea.

His older brother John served as the president of PepsiCo and was later recruited to fill the same post at Apple by the latter’s co-founder Steve Jobs in 1983, which he held for a 10-year period. Arthur’s younger brother David was the CEO of Heinz USA.

Q. Has China entered a soft landing phase as suggested by some market analysts? If so, how will this affect Korea?

A. China has entered into a soft landing. The most recent numbers that I’ve seen are 7.8 percent growth in the second quarter, that’s down from 8.2 percent. The chances of a hard landing are there, but they are slight. China is going into a political transition right now. Many important decisions are being delayed until the new administration is in power. Until that’s done, you won’t see China start to implement longer arrangement plans. China is so big, it affects everyone. There’s no doubt that Korean exports will also be affected. I don’t think it’s going to be dramatic, but it will certainly be a slowdown to some degree, as it is with most countries because of the importance of China.

Why are foreign investors continuing to snap up Korean stocks?

Korea having its own currency, and not one that is dependent on other currency, is a very big plus. The economy here is well balanced. It’s one of the leading non-high-income countries, but it’s rapidly becoming a high-income country. It’s almost on the border right now. It’s part of the G20. That has caught the attention of many people around the world, and that’s why you’re seeing these investments coming into Korea.

What are your thoughts about the Fed’s recent QE3?

These are very short-term measures. They ease the pain a bit, but they don’t solve the problem. By far the more important issue is structural change, which has been needed in the U.S., and in Europe in particular. Those are long-term issues. That’s everything from investing in infrastructure to education to job training. That’s what’s going to turn economies around in the longer term. Unfortunately in the U.S., neither of the two presidential candidates has really offered clear long-term plans for addressing these structural issues [and] I hope whoever wins the presidency will announce a long-term strategy.

Some analysts said Korea may soon surpass Japan in economic output per capita as Korea’s IT and shipbuilding sectors have already climbed passed that of Japan. Japan’s manufacturing sector is seen as losing some of its edge due to its outdated financial market.

I would not agree with the word ‘outdated’ financial market. I would say that banks have had significant problems for over two decades now, and the government has not been able to address the problems, which is why the banks need to write down some of their overvalued assets. [Japan] has tried to address that with a low interest rate, but that’s simply not enough. Korea is really different in a sense that you went through a big Asian financial crisis in 1997. You had to restructure all of your banks. Japan hasn’t gone through that painful restructuring. Korean banks are now in a very good shape. They don’t have these problems that Japan has been holding on to for two decades. I don’t see Korea following in Japan’s footsteps. That’s not to say that there won’t be difficulties, because the world economy is now slowing down and certainly Korea will feel that.

What has motivated you and your brothers to become pioneers in key industries?

My father, who was a lawyer and had no business background, emphasized education, and my mother did too. Our parents were never on our backs about doing things. They just assumed we would do it. We knew our father was borrowing money to send us to school. We assumed we were going to have to work hard. Sadly, both my parents died young when I was in my first year of university. So we had to scramble. We realized there was no money. We had to get jobs, scholarships. It was a challenge. From that standpoint, we were probably thrown into the work world a little bit sooner than other people were.