VAT one bridge to welfare

VAT one bridge to welfare 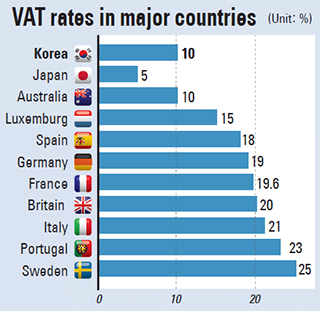 The debate over whether the value added tax (VAT) rate should be raised from its current 10 percent is growing in ferocity as worries about shortfalls in the government coffers increase.

If people want an improved welfare safety net, they must pay for it, said Kang Bong-kyun, the finance minister during the Kim Dae-jung administration, at a forum held by the Ministry of Strategy and Finance yesterday.

As a means of raising tax revenues, Kang proposed hiking the VAT rate for the first time since it was introduced in 1977. It has already been lowered from 13 percent due to stiff opposition.

Kang pointed out that welfare pledges by both the ruling Saenuri Party and the main opposition Democratic United Party lack specific measures to drum up the required funds. He said that expanding social welfare programs could threaten the country’s fiscal soundness unless such details are hammered out.

Kang estimated that the ruling party’s education, child care, medical and employment pledges would need about 75 trillion won ($68.8 billion), while the opposition party’s would require around 164 trillion won.

“While candidate Park Geun-hye’s welfare-related pledges are becoming similar to those of the DUP, her party remains cautious about raising taxes,” he said.

“Raising the VAT rate by 2 percentage points would cause annual tax revenue to increase by 15 trillion won,” Kang said, adding that this would be the most effective method of generating more cash for the government to spend.

He was opposed to hiking income tax rates, however, saying that this would run counter to the issue of fair distribution of income. Increasing property tax rates would not help boost the depressed real estate market, he added. 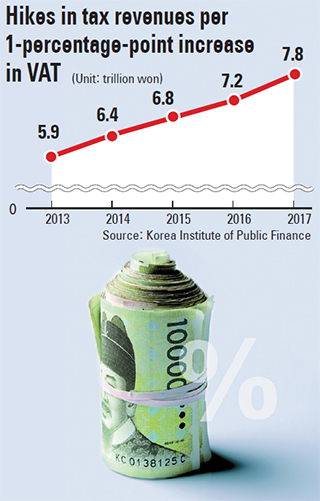 Responding to criticism that higher VAT rates could push up consumer prices and add more of a burden to low-income households, Kang said inflation would only be a temporary issue.

“We need a leader who can frankly say there is no welfare without [higher] taxation,” Kang said.

VAT is seen as the easiest tax to play with because the rate is so low compared to advanced countries. Denmark and Sweden set their rates at 25 percent, while Britain has it at 20 percent, France charges 19.6 percent and Germany 19 percent, according to the state-run institute.

The KIPF estimates that a 1 percentage point hike in the VAT rate would add 5.9 trillion won to total tax revenue next year, while the surplus would climb to 7.8 trillion won by 2017.

The International Monetary Fund and the Organization for Economic Cooperation and Development both recommended in 2008 that the Korean government increase the rate. But there was no effective discussion on the matter in the country.

Self-employed people of small companies with low profitability argue that a higher VAT rate would merely add to their mounting household debt.

“We are struggling to deal with the current rate of 10 percent, so how would we possibly manage if it were to go up,” said a 48-year-old man who owns a Korean barbecue restaurant in southern Seoul.

Under the current tax law, businesses with annual sales in excess of 48 million won must pay 10 percent of their sales to VAT. Those with lower income only have to pay 2 to 4 percent.

“The threshold for the bottom rate is not fair because so many small merchants do not fit inside that tiny bracket, which is the lowest level at which any company can survive,” he added. “Basically, many poor businesses are paying the same VAT as larger, much more profitable companies.”

He urged the government to raise the threshold to annual income of 100 million won.

“As we have never changed the rate, we’re treading very carefully because doing so would trigger a lot of complaints from working-class people,” said an official at the Finance Ministry.