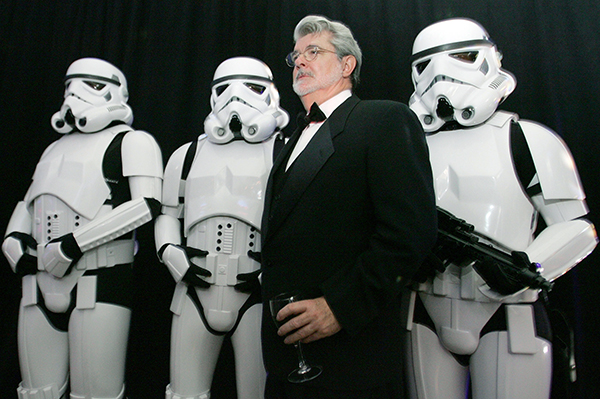 SAN FRANCISCO - One of the many intriguing sub-plots in “Star Wars’’ lore is just how many sequels moviemaker George Lucas originally wanted to make.

The most popular theory is that Lucas envisioned nine movie-length episodes, broken into three separate trilogies to be released over 20 to 40 years. Under this line of thinking, the original ”Star Wars’’ purportedly was always intended to start the middle sequence of the intergalactic saga.

Now an entertainment force even more powerful than Lucas is finally going to turn what once seemed like a myth into a prophecy.

The Walt Disney Co. vowed to make at least three more “Star Wars’’ movies with Tuesday’s announcement that it’s buying Lucasfilm for $4.05 billion. The next installment is due out in 2015, a decade after Lucas released the sixth “Star Wars’’ movie, “Revenge of the Sith,” and declared it would be his last.

The possibility of there being at least nine Star Wars movies began to surface in media reports in the late 1970s, but the idea really began to gain traction in a 1983 book by Denise Worrell titled “Icons: Intimate Portraits.’’ The book quotes Lucas as saying he intended to make three “Star Wars’’ trilogies: one dealing with the social and political (the set that fans believe covers the movies released from 1999 through 2005), another would cover personal growth and self-realization (topics covered in the original trio of films), and the final stanza would delve into moral and philosophical problems.

There are also indications that Lucas may have even flirted with making even more than nine “Star Wars’’ movies. In a 1978 article, Time magazine reported that Lucas would make the sequel that became “The Empire Strikes Back’’ and then possibly build upon the fable in 10 more films. This theory gained further credence years later during a 2004 public appearance by Mark Hamill, the actor who played the grown Luke Skywalker in the original trilogy. Hamill was quoted as saying that Lucas told him in 1976 that his grand plan called for four “Star Wars’’ trilogies. Hamill said Lucas even asked whether he wanted to be in “Star Wars IX’’ when it came out 35 years later, according to reports of his comments.

But before “Revenge of the Sith’’ came out in 2005, Lucas sought to shoot down the notion that he ever wanted to extend the franchise beyond six films.

“This was never planned as a nine-episode work,’’ Lucas told MTV. “The media [pounced when] I made an offhand comment, ‘It might be fun to come back when everyone’s 80 and do another one of these.’ But I never had any intention of doing that.’’