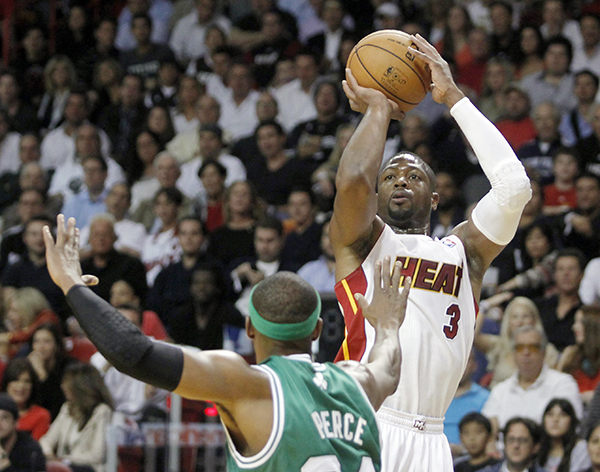 Miami Heat guard Dwyane Wade, right, leaps to shoot under pressure from Boston Celtics’ Paul Pierce in the first half during their NBA basketball game in Miami on Tuesday. Wade scored 29 points as the defending champions beat the Celtics 120-107 in the season opener. [REUTERS/YONHAP]

None of that spoiled the Miami Heat mood on ring night.

Wade scored 29 points, James finished with 26 points and 10 rebounds while missing much of the second half because of cramps in both legs, and the reigning NBA champion Heat beat the Boston Celtics 120-107 on Tuesday night in the season opener for both teams.

There were actual fireworks before the game to close the ceremony where the Heat got their championship rings and raised their title banner. There also were plenty of figurative fireworks late, first with Boston almost digging out of a 19-point hole and, after the outcome was decided, Rajon Rondo flagrantly fouling Wade by wrapping his arms around his neck on a drive.

In the end, though, the first Celtics-Heat matchup of this season was like the final one of last season - with Miami winning.

“It was good to cap this night off with a win,” Heat coach Erik Spoelstra said. “It was an emotional time for all of us in our organization.”

Even for the newcomers, like Allen. He scored 19 points - needing only seven field goal attempts - in his first game with Miami since leaving Boston over the summer. Chris Bosh had 19 points and 10 rebounds for Miami.

Allen got chants from the Heat crowd, which is nothing new. Except this time, they were positive.

Paul Pierce scored 23 points, Rondo finished with 20 points and 13 assists, and Leandro Barbosa scored 16 for Boston. The Celtics, who lost to the Heat in last season’s Eastern Conference finals, were not on the court for the ring ceremony.

They almost wrecked the festive mood with a late comeback.

An 11-2 run late in the fourth quarter got Boston within 111-107 on Courtney Lee’s layup with 2:09 left. That was the last Celtics’ hurrah - Bosh scored the game’s next seven points, sealing it for Miami.

Rashard Lewis scored 10 points for Miami, which held on even while James, last season’s MVP of both the regular season and NBA Finals, was in the locker room for the second time because of the cramps, first in his right leg and then his left.

“It’s not an all-the-time thing,” James said. “I’m not too worried about it.”

In Los Angeles, Darren Collison scored 17 points, Brandan Wright added 14, and the Dallas Mavericks spoiled the Lakers debuts of Dwight Howard and Steve Nash with a 99-91 victory on Tuesday night.

O.J. Mayo had 12 points as the revamped Mavericks pulled off a stunner in their opener, comfortably beating the star-studded Lakers without any help from injured Dirk Nowitzki.

Kobe Bryant scored 22 points while playing on an injured right foot, but the Lakers opened a season of enormous expectations with a major dud of a performance.

Howard had 19 points and 10 rebounds while missing 11 of his 14 free throws before fouling out with 2:02 to play. Nash managed just seven points and four assists with seemingly little to do in the Lakers’ new offensive scheme.

Pau Gasol had 23 points and 13 rebounds for the Lakers, whose loaded lineup followed up its 0-8 preseason with a largely lifeless second-half effort in front of a sellout crowd expecting to see a super team capable of contending for the franchise’s 17th championship - a fact acknowledged by Bryant when he addressed the fans before the game.

“As you know, we have a lot of expectations this season,” Bryant said.