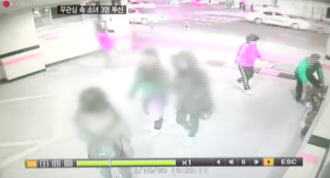 BUSAN - Three teenage girls who met in an online suicide club jumped off the top of an apartment building in Busan and died.

The Nambu Police Precinct in Busan said yesterday three teenage girls jumped off the roof of a 15-story apartment building in Suyeong District at 10:30 p.m. on Tuesday after drinking soju together.

The three fell onto the roof of a six-story arcade next to the apartment. They died instantly.

“I received a complaint from a resident about noise, but the door of the rooftop was locked when I got there,” a security guard of the apartment said. “Minutes later, I heard the sound of heavy objects hitting the ground and I was able to see the three girls lying dead.”

Police found three soju bottles and the girls’ bags on the roof but no suicide notes. The girls were identified as Jeong, 16, from Busan; Yoon, 17, from Daejeon; and Kim, 19, from Gwangju. Yoon and Kim allegedly left their hometowns on Saturday and met Jeong in Busan.

The three watched the Busan Fireworks Festival on Gwangalli Beach on Sunday and stayed on the rooftop of the randomly chosen apartment from Monday afternoon, police said.

The police said Yoon and Kim attempted suicide together back in August in a motel room in Busan. The charcoal they burned didn’t work, and the owner of the motel smelled the smoke.

“The girls met through an Internet suicide club that gives information on how to commit suicide,” a police spokesman said. “We are trying to identify the Web site by tracing the girls’ Internet access records.”

The Korean Association for Suicide Prevention said the number of Internet suicide clubs for Koreans increased to 8,511 last year, up by a factor of 10 from 849 in 2008.

“More than 10 to 20 suicide posts in Korean can be found on Internet clubs a day,” a spokesman of the association said.

In fact, at 2:41 a.m. yesterday, four hours after the three girls were found dead in Busan, a Korean posted a message on a suicide club looking for a partner. “If anyone wants to commit suicide together, please send me a message,” it read.

In less than an hour, nine responses were posted, reading, “I’ll go with you,” and “Send me a message.”

The police and Web portal service operators monitor such sites, but they say the volume is too much to handle.

“When a netizen puts the word ‘suicide’ in our search engine,” a spokesman of a Web portal service said, “we set our system to let him or her see the suicide prevention counselling numbers as a prevention measure. But the problem is that there are too many messages.”