Man uses Google to get info of nearly 9M people

Man uses Google to get info of nearly 9M people

An unemployed 37-year-old man with no expertise in computer hacking, who spent the past 10 years in isolation going back and forth between his room and a PC room, was found to have amassed the personal information of almost 9 million people in the past two years, solely through using Google’s search function. 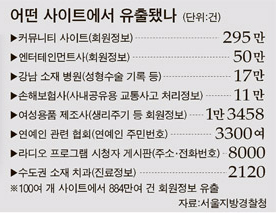 According to the police, Kim, who dropped out of a Seoul college and has been unemployed over a decade, solely relied on Google, the dominant search engine for Internet users worldwide, to find and extract private information that include sensitive matters such as a woman’s menstrual cycle from Web sites of women product-manufacturing firms as well as addresses and resident registration numbers.

Kim was able to gain access to certain managerial areas of web sites by putting “admin” into the Google search bar along with names and personal information of site members.

Web sites that the suspect accessed information from include those of K-pop entertainment agencies, insurance companies, obstetrics clinics and community sites. The investigators said it is yet to be confirmed if the suspect handed over the leaked profiles to someone else for profit.

The potential market could be anyone with an interest in personal information, including specialized advertising or companies who want to send out mass mailers, or spam mail.

“Many Web sites run by small-to-medium size firms do not take measures, [that would prevent the leak of personal information] worried that it would incur additional maintenance costs,” said an investigator.

The police reported managers of those sites exploited by Kim had not been informed of the breach into their sites until the police mentioned them after the arrest.

Kim reportedly told investigators that he sought private information “out of curiosity for no particular reason.”

It is not the first time the college drop-out was found stealing personal information from the Internet. Kim was arrested by the police in 2009 for conducting the same behavior. He was sentenced to probation and released.

“Depending on the extent and seriousness of personal information leaked by Kim, those responsible for managing the breached sites could also be prosecuted for failing to protect the information,” said an official with the police.