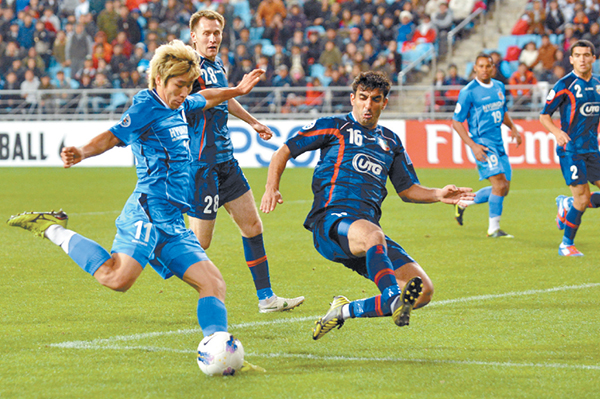 Lee Keun-ho, left, of Ulsan Hyudai FC, attempts a shot near the penalty area during a second-leg match of the Asian Football Confederation Champions League semifinal at Munsu Stadium, Ulsan, Wednesday. Lee and Kim Shin-wook scored as Ulsan advanced to the final 5-1 on aggregate over Bunyodkor of Uzbekistan. [NEWSIS]


Ulsan Hyundai FC advanced to the Asian Football Confederation Champions League final after beating Bunyodkor of Uzbekistan 2-0 at home on Wednesday night, extending its lead to 5-1 on aggregate and becoming the fourth straight K-League club to play in the prestigious championship match.

Ulsan will meet Al Ahli of Saudi Arabia in the final on Nov. 10, which will be played at Ulsan’s Munsu Stadium after a lucky AFC drawing.

It has already been an historic campaign for Hyundai in the ACL. The club has only advanced to two ACL tournaments before, including in 2006 when it advanced to the semifinals and in 2009 when it was knocked out in the group stage.

Hyundai coach Kim Ho-gon, who has prioritized the Asian campaign over the domestic league, has said he wants an Asian title not just for the club but also for the development of Korean football.

“Winning the K-League title is important for us, but for the development of Korean football, I think it is crucial for any K-League team to win on a bigger stage,” Kim told reporters after Wednesday’s match. “Last year, a K-League club only ended up in second. At this year’s ACL final, we certainly want to win.”

The Jeonbuk Motors lost to Al Sadd of Qatar on a penalties during last year’s final. Seongnam Chunma won the title in 2010 while the Pohang Steelers finished runners-up in 2009.

During Wednesday’s match, Kim Shin-wook put the hosts ahead in the 53rd minute before Lee Keun-ho sealed the deal with a fine effort 16 minutes from time.

Ulsan had secured a 3-1 advantage over Bunyodkor in the first leg in Tashkent a week ago, and it proved an insurmountable task for the Uzbek champions.

Bunyodkor, needing to score three times to have any chance of reaching the final for the first time in their short history, pushed for an early goal, but goalkeeper Kim Young-kwang kept them at bay.

He was on hand to twice deny Shavkat Salomov in the opening 18 minutes as Mirdjalal Kasimov’s side sought the strike that would give them a fighting chance.

But while their keeper played a key role, Ulsan looked the more likely to score as the half wore on, with Kwak Tae-hwi and Juan Estiven Velez both going close to scoring the goal that would have killed the game.

Eight minutes into the second half, Kim gave his side the lead when he struck from close range with a right-foot shot that left Bunyodkor goalkeeper Ignatiy Nesterov with little chance.

And in the 74th minute, Lee put the result beyond any doubt with a sumptuous right-footed shot from just inside the area, which arrowed home well out of Nesterov’s reach.

“We were simply faced with a very difficult match in the semifinals and in football there are always winners and losers, and unfortunately for us Ulsan were just too strong,” the coach told the AFC Web site.

Before the ALC final, Ulsan will take on the Steelers in a K-League match tomorrow.