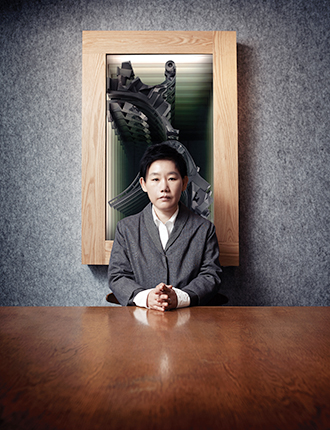 Lee Bul seeks to shift her ways of expression by having viewers engage with her work. Provided by Artsonje

From the outside, a mirror-tile installation gives off the aura of a mysterious, futuristic wonderland. Stepping inside the claustrophobic labyrinth, however, viewers are struck by a wave of confusion and anxiety.

Lee Bul’s “Via Negativa” marks a shift in the way the artist presents her work by placing the audience into her installation art rather than exhibiting a set of sculptures and drawings.

The artist’s current solo exhibition “Lee Bul” at the Artsonje Center in central Seoul features four installation works - all, including “Via Negativa,” newly released for this exhibit - and approximately 220 drawings, models and research materials for some of her signature pieces, such as sculptures from her “Cyborgs” (1997?2011) and “Anagrams” series (1999?2005), “Mon grand recit” series (2005?present) and the “The Secret Sharer” (2012).

Lee held her first full-scale retrospective “From Me, Belongs to You Only” at Tokyo’s Mori Art Museum earlier this year, covering the more than 25 years of her career.

Selected as a finalist for the 1998 Hugo Boss Prize by the Guggenheim Museum in New York, Lee is the second foreign artist after China’s Ai Weiwei to hold a retrospective at the Mori Art Museum.

It is extremely rare for an artist to reveal a new piece of work only three months after holding a retrospective. But the 49-year-old Lee took on the challenge, saying she gets a kick out of achieving a seemingly unattainable goal. She says she was “pretty satisfied” in the end.

Lee Bul discussed her latest work and what exactly she looks to deliver through the exhibition during a panel discussion held at the Artsonje Center. 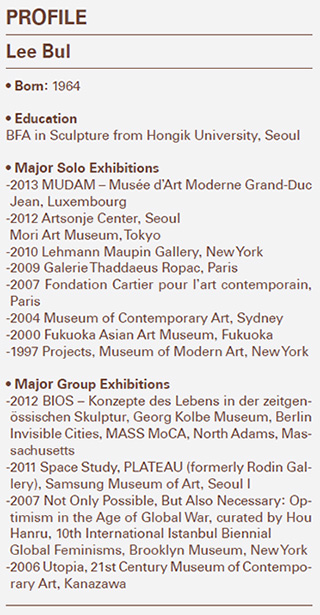 Q. How did you start planning the exhibition?

A. I held a large-scale retrospective earlier this year encompassing the past 25 years of my career. An artist gets mixed feelings after that type of exhibit. On the one hand, he or she feels proud of the career, but on the other hand is likely to think, is this it? Is this all of my career? I heard most artists feel depressed and hopeless after having their own retrospective. Many say this is the time that they most likely suffer a stagnant period. I didn’t want to give in to the stereotype. More importantly, I didn’t want to go through a period of stagnation, thinking I need to create something right away.

Did everything go smoothly?

No. I had doubts about whether I could complete the exhibit or produce quality works that could follow through with my intentions. But two days before the opening of the display, I thought, “Things are going to work out.”

What is your message or intention behind “Via Negativa?”

I want to make the viewers feel a lingering fear, something that is hard to put into words. I was not sure whether I could evoke such strong feelings. So I tried to get inside “Via Negativa,” and I actually felt the feelings that I wanted to deliver. Even though I acknowledge that I can get out through the sidelines whenever I want, I was overwhelmed with fear.

What do you want to express through “Bunker?”

“Bunker” is part of my “Mon grand recit” series, which is presented for the first time in Korea. Combining sculptural and interactive sonic elements, “Bunker” brings together a range of references revolving around the unfortunate fate of Yi Gu, the last heir of the Joseon Dynasty (1392-1910). Yi Gu was a young architect in I.M. Pei’s New York office when he was summoned back to Korea by Park Chung Hee, who sought to exploit him to shore up his regime.

Yi led an unhappy life under Park’s regime and eventually returned to Japan where the man died in a Tokyo hotel room. “Bunker” incorporates various references symbolizing Yi Gu’s life in a sculptural form. Inside the sculpture is a sonic reconfiguration installation where the viewers can hear their sounds in different aural dimensions, immaterial spaces and landscapes connected to Yi Gu’s biography - via acoustic sampling and computer modeling. They might be placed at the intersection of the past and the present.

Lee Bul’s “Via Negativa” is designed to give feelings of looming fear through its mirrored, tight space. Provided by Artsonje


Why did you choose Yi Gu?

The course of Yi Gu’s life has a lot of historical significance and I want to deal with a broader theme encompassing modernization and civilization. Yi Gu might have been the king of the Joseon Dynasty if Japan didn’t invade Korea. He was born in the Akasaka Prince Hotel, built by Japan’s prominent architect Kenzo Tange. Then he went to Massachusetts Institute of Technology in the United States to study architecture. In the end, he died in the Japanese hotel room.

I put the pieces of the buildings in which he stayed in the sculpture “Bunker.” The sound installation gives viewers the impression that they are taken back to the early 1900s.

You also adopted sound elements in your previous work “Live Forever.” Why are you interested in using sound with your art?

[“Live Forever” is an sleek karaoke pod for a single person in which visitors can take part in their own individual karaoke sessions.]

I didn’t install the sound system on purpose. They are just part of the mediums of expression. I don’t limit the form of expression. When making “Live Forever,” I tried to shake the stereotype of karaoke where a group of people gather and enjoy the stage.

That is how I created a singing lounge for only one person. I went to the extreme to present an unfamiliar creature.

It seems you have changed your ways of expression. Why did you embrace such a change?

In the past, I mostly presented symbolic materials. I think I was good at putting together separate symbolic elements and the elements varied from personal to historic.

I investigated how an object could be reinterpreted in a historical context, reconfiguring the shape of the object. But I grew doubtful about all the symbolism that I attached. There is no symbolism at the solo exhibition, especially the work “Via Negativa.” I think the main theme is not that different from the former works, but the way of conveying the theme has changed.

Earlier in your career you created a lot of sculptures criticizing society, saying it discriminates against female artists. What is it like to live as a female artist?

Still, I don’t think things have improved. I am not free from the discrimination but just keep doing what I am supposed to do.