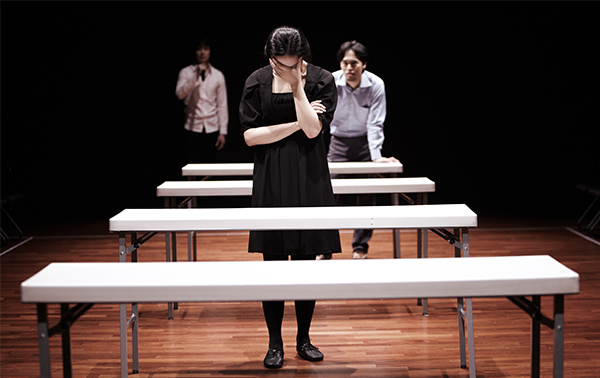 The Yangson Project will perform “Death and the Maiden,” the 1990 play by Argentine-Chilean Ariel Dorfman, at the Doosan Arts Center in central Seoul from today until Nov. 17. Provided by the Doosan Art Center

This question has been the crux of acclaimed Korean films “Lady Vengeance” by director Park Chan-wook, “I Saw the Devil” by Kim Ji-woon and most recently “Pieta” by Kim Ki-duk. It has resonated with a Korean society all too familiar with loopholes in the justice system.

English philosopher Francis Bacon once said that “revenge is a kind of wild justice, which the more man’s nature runs to, the more law ought to weed out.” But in particular cases of perceived injustice, the outcome of legal recourse can be maddening.

Argentine-Chilean playwright Ariel Dorfman captures this struggle in “Death and the Maiden,” a 1990 play that premiered at the Royal Court Theatre in London and was made into a Broadway production in 1992.

The Yangson Project, a small troupe composed of three actors and a director, is performing the play at the Doosan Arts Center from today. The Doosan Arts Lab, the center’s young artist nurturing program, is sponsoring the series.

“Death and the Maiden” tells the story of Paulina Salas, a woman who was tortured at the hands of the former authoritative regime of her country. She was a student activist when she was kidnapped, blindfolded and taken in for an interrogation. A medical doctor in the room raped the student, with Franz Schubert’s “Death and the Maiden” playing in the background.

Fifteen years have passed, and Paulina, now married to Gerardo Escobar, a human rights lawyer, encounters a medical doctor who she is immediately convinced is the rapist. The doctor, named Roberto Miranda, saw the lawyer struggling to change a flat tire and drove Gerardo home.

Paulina ties the doctor down in her home and threatens Dr. Miranda with a gun, insisting he confess. Gerardo tries to dissuade her from taking matters into her own hands in part due to his conviction for the rule of the law and a lack of evidence. Paulina says she knows Dr. Miranda is the rapist by his voice, skin and body odor. But Gerardo is also trying to save face as the head of a committee of the now democratically elected government.

Much more drama unfolds as the characters react to the tense situation, fighting for justice and redemption.

The original play and the 1994 adaptation into a film by Roman Polanski are both around 100 minutes long, but the Korean troupe cut it down to a one-hour performance.

The main scenes of the play were reduced from eight to three. The setting has become minimalist; one of the male characters also assumes the role of a narrator, removing the need for many of the original stage devices.

Choi Ji-hye, the director of the Yangson Project, said the minimalist approach was to avert frustration with an unfaithful reproduction of “a well-knitted play.” She said she justifies the efforts to create her own style with more focus on the agony of Paulina, who is still in the hearts of “many voiceless Korean women.”

“We researched a lot of such torture and rape cases under the former Korean authoritarian regimes and discovered that many of them remain unresolved still,” Choi said. “They must have suffered a lot, but all too often it was only their pain.”

The peaceful Schubert string quartet, played twice during Choi’s rendition, amplifies the violent nature of the incident, similar to the use of music in Stanley Kubrick’s 1971 adaptation of “A Clockwork Orange.”

When Gehardo, played by Son Sang-kyu, suggests they bring Dr. Miranda to the legal authorities, Paulina shouts back, “You can say so because you did not suffer in his hands.”

Paulina’s quest for private redemption brings up many moral questions, including whether Dr. Miranda is the real criminal and whether the revenge would really bring any closure to Paulina’s pain.

The acting during a press call on Wednesday was largely flat, with voices not conveying the emotions properly, and the dynamics among the characters lacked suspense.

The power of the story, however, may move it forward for much of the running time, and that could be sufficient for some local theatergoers yearning for a complex and well-written play.