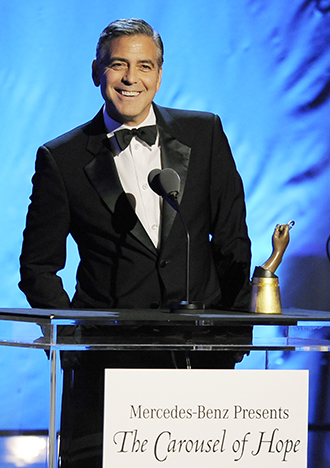 Aunt Rosemary was not George Clooney’s only famous relative. You can add a certain Civil War American president to the Oscar-winning actor’s family tree.

Politics has apparently run in the activist actor’s blood for centuries, as Web site Ancestry.com on Thursday revealed that the “Ocean’s 11” star is distantly related to President Abraham Lincoln.

According to Ancestry.com, Clooney is the half-first cousin five times removed from Lincoln, the 16th president. The genealogy Web site breaks down the connection, explaining the “half” means that two of their ancestors were half-siblings - Lincoln’s mother Nancy Hanks was the half-sister of Clooney’s fourth great-grandmother, Mary Ann Sparrow. Hanks and Sparrow shared the same mother, Lucy Hanks, but had different fathers. Lucy Hanks was Lincoln’s maternal grandmother as well as the fifth great-grandmother of Clooney.

Clooney’s aunt was singer and actress Rosemary Clooney, who died in 2002.